Josh Bilicki is known for road course racing and on Saturday, even he had issues.

Sunday’s 30th place finish by Bilicki tied his fourth career-best finish and if the race had gone back green, he feels that he would’ve had a chance for a top-25 finish.

“Hate we didn’t get the results we deserved,” Bilicki said on social media. “Had we stayed out for another lap, we would have grabbed a top 25. Oh well, that’s the way these things go sometimes. Was great to have Texas-based business Junction Fuels, Dealer Reconditioning Services, and THE BOSS onboard this weekend in their home state. Time to get ready for our longest race of the season – Coke 600!”

Bilicki has raced in the rain in NASCAR before running in last year’s NASCAR Xfinity Series race at Charlotte. In that race, rain-plagued the whole event but Bilicki came out with a 13th place finish, his second-best career finish. Sunday’s race though was a monster on its own and as you may have heard by now, visibility was horrendous.

“It’s crazy but it was fun,” Bilicki told Kickin’ the Tires as the race was being called. “I was hoping we could keep running but it’s definitely unique. I think everyone has learned a lot but the backstretch is sketchy. It’s hard to see and you kind of just have to find the side, what I would call the sidelines, and just hope you know where you’re breaking and nobody else messes up in front of you. I honestly don’t think it got worse but you never know.”

Bilicki has tons of experience on road courses including 22 total starts in NASCAR on Road Courses, Sports Car Club of America, and IMSA Continental Tire Sportscar Challenge. Running for Rick Ware Racing in a single-car shop based in Mooresville, North Carolina, Bilicki and team find the little victories including running against the higher budgeted teams. Bilicki ran as high as 15th during the race. Bilicki was also running speeds that rivaled the likes of Michael McDowell, Brad Keselowski, Tyler Reddick, among others with a 75.892-mph lap late in a run. He also added 17th fastest in green-flag speed.

“We definitely had the speed to finish higher,” Bilicki added. “We pit for new rain tires when the weather picked up and NASCAR threw the caution while we were on pit road and then ultimately called the race. Lost multiple positions. Disappointed, but always encouraging to race against teams way above our grade. This race was wild. 170+mph down the backstretch and couldn’t see a thing, all while hydroplaning. Thankful no one was injured today.

Bilicki makes his 50th career NASCAR Cup Series start Sunday in the Coca-Cola 600. He made his Coke 600 debut last year with Tommy Baldwin Racing finishing 36th. So far this season, he earned his career-best finish at Martinsville finishing 23rd. 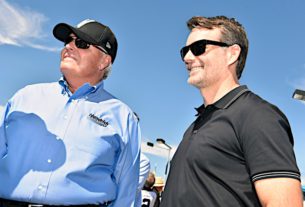 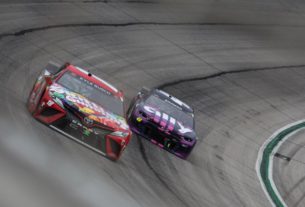 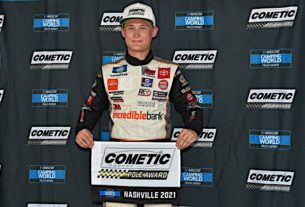