The short track racer led all but the final lap of the eThanksgiving Classic at Southern National Motorsports Park about one month ago. In the latest big money special event promoted by Windshield Deep, Kelley had the cautions fall his way and kept his competition at bay.

Kelley first took the lead at the virtual Richmond Raceway from pole winner and ARCA Menards Series East driver Parker Retzlaff on lap 75. The duo relinquished the top spots to pit prior to the competition caution on lap 100. Once the race went back green, Kelley wasted no time moving back to the top spot. On the 121st circuit of the 200-lap scheduled distance, the No. 75 TP30 Designs Chevrolet Super Late Model slipped by race leader Garrett Konrath.

Back in the lead, Kelley cruised until a series of late-race cautions brought the fresh tires of eNASCAR Coca-Cola iRacing Series drivers Garrett Manes, Jimmy Mullis, and Matt Bussa closer. Retzlaff was dispatched into the outside wall in the late stages, but the caution did not wave for his incident. The series of cautions started when Briar LaPradd’s right rear tire failed, causing him to spin.

A wreck between Blake Near and Paul Kusheba forced the race into overtime. On the first attempt of overtime, contact between Bussa and Mullis sent the Richmond Raceway eSports driver into the outside wall on the backstretch. At the same time, Ryan Kuhn spun from fifth. What ensued was a track-blocking, field consuming wreck. Only Bussa and Manes emerged unscathed with Kelley ahead of the mayhem.

On the final overtime, Kelley jumped ahead. Meanwhile more shenanigans took place as Ryan Matthews punted Bussa in turn one. The eNASCAR veteran spun down the track into the path of four-time champion Ray Alfalla. The duo made contact, sending Bussa back up the track.

Despite the further carnage, the caution did not wave. Kelley held off Manes by 0.462 seconds to take the victory and a $1,000 prize. He also won four tickets to the Blue Emu Maximum Pain Relief 500 at Martinsville Speedway from the race title sponsor.

Matthews initially finished third but was penalized to the tail-end of the lead lap for wrecking Bussa. Marcus Fruchtenicht inherited third. Blake Near and Alfalla, who was making his first Super Late Model start, completed the top-five.

“I have no idea (how I held everyone off), they had some fresh tires,” admitted Kelley. “When I got out front, I was able to save some. Those cautions came out and may have helped me a little bit. They cooled my tires back down and I was able to pick up off the corner. I was hoping that I could get out front, lead some laps, just hoping that I could pull away from them. My car was on rails.”

Post-race, Kelley stated that he would probably put his winnings towards his real-life racing ventures. He competes at Florence Motor Speedway, Dillon Motor Speedway and at the now-defunct Myrtle Beach Speedway.

“This is crazy, definitely the biggest race (on iRacing) that I’ve ever won,” explained Kelley. “So many big names in here that I’ve looked up to racing. This is awesome. Coming from Southern National, I knew coming in that I had to win.”

The action started early as Mullis attempted to clear himself on lap three. The resulting accident collected several competitors. Donovan Strauss, who qualified third and had dropped to the back in an attempt to earn bonus money was among those swept up in the accident.

eThanksgiving Classic winner Alex McCollum encountered his own late race issues. The former eNASCAR Coca-Cola iRacing Series driver spun and struggled to get the car moving. He retired from the race and was scored 30th. 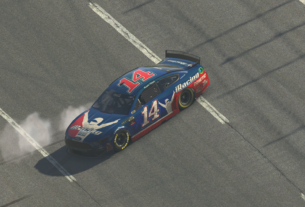 Kettelle breaks through with eNASCAR win at Talladega 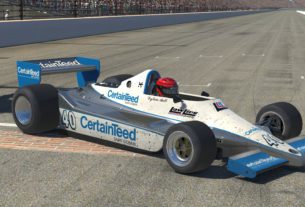 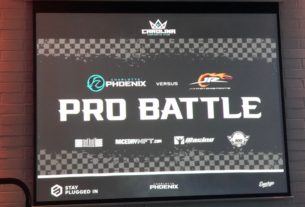