With both the No. 18 Joe Gibbs Racing Toyota and the No. 81 Engine Ice Toyota parked on the Bristol Motor Speedway frontstretch, facing each other with their bumpers touching, each driver roared his engine and punished his General Tires for an epic double burnout.

Gibbs and Smith carrying out this apparent plan were possible thanks to the way the teammates dominated Thursday night’s Bush’s Beans 200 at the half-mile concrete oval in Bristol, Tennessee.

Smith, the 17-year-old East Series regular from Johnston, Iowa, entered the East Series season finale — a combination event with the ARCA Menards Series — with a 24-point lead over second-place Daniel Dye in the championship standings. Smith, a rookie, simply needed to finish 19th or better to ensure he would leave Bristol with the title.

“It’s a good day, one-two for Gibbs,” Smith said. “I can’t thank all the guys on the 18 team and the 81 team enough for getting us through these last couple of races. I can’t thank them all enough.”

With Engine Ice on board as a partner, Smith joined JGR for the East Series this season on the heels of a 2020 CARS Super Late Model Tour season in which he earned three top-five and six top-10 finishes.

As the scene at Bristol proved, the driver-team pairing was the perfect match. He officially won the championship by 34 points over Dye.

“We just had to hang on,” Smith said of his run Thursday. “I felt like we were a little bit tight. We didn’t have as good a car as Ty did, so I just felt like we had a second-place car, and that’s all I was going to be able to get out of it. I tried there at the end; just wasn’t enough.”

As for Ty Gibbs, Thursday’s victory at Bristol was a big step for the 18-year-old in his own title quest. With two ARCA Menards Series races remaining (Salem Speedway on Oct. 2 and Kansas Speedway on Oct. 23), Gibbs has a 26-point lead over second-place Corey Heim in the championship standings.

“This is just awesome,” Gibbs said. “This really means a lot to have all my guys there and to have my teammate, my close friend, to wrap up his championship. It’s just awesome. Great night for our organization.”

Gibbs’ 200 laps led at Bristol increased his season-long total to 1,438 through 18 ARCA Menards Series races, easily the most in the series. He led all of those laps Thursday in spite of many restarts following cautions.

The Bush’s Beans 200 also served as Round 9 of the 10-race Sioux Chief Showdown, a series within the ARCA Menards platform that allows East and West Series drivers a chance to compete with ARCA Menards Series regulars for a title on short tracks and road courses.

Gibbs extended his lead over Heim in that series, too, with one race (Salem) remaining. 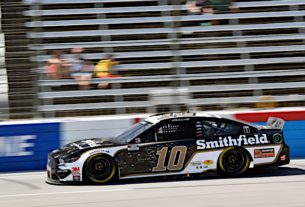 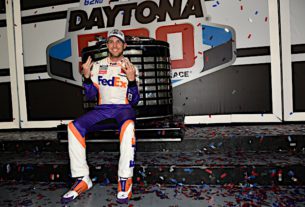 Denny Hamlin: Historic 3rd Straight Daytona 500 Would be ‘Biggest Victory of My Career’ 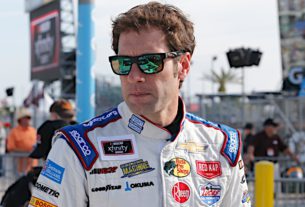