LAS VEGAS – NASCAR driver Joey Gase was released from an area hospital after sustaining injuries in a scary crash at Las Vegas Motor Speedway when a wheel came off his No. 15 Rick Ware Racing Chevrolet.

Please read below and thank you so much for the support.
– Joey Gase Racing PR pic.twitter.com/7CQwmyKnPY

Gase car hit the outside wall in Turn 2 with such force after losing the left rear wheel that it was thrown several feet into the air before coming back down the track and striking the inside wall. After the initial impact, the car also appeared to pirouette, coming close to flipping over.

Gase was able to walk to the ambulance under his own power but after a period of time in the Las Vegas Motor Speedway infield care center, he was transported to the hospital for further evaluation.

A statement on the situation was also released by Joey Gase Racing that reads, “This evening, at Las Vegas Motor Speedway, Joey was in a scary wreck when a parts failure caused his LR wheel to come off which led him to make heavy contact with the wall and go airborne. The medical staff at the track decided to take the precautionary measures to have Joey further evaluated at the hospital. He has been released from the hospital and will be further evaluated in Charlotte. Joey would like to thank the medical staff for taking great care of him and everyone for the prayers and ongoing support.”

A spokesperson for the Rick Ware Racing team confirmed to Kickin’ the Tires that Gase was released from the hospital early Monday morning and returned to Charlotte, N.C. where he will follow up with medical staff there. He is still optimistic that he can race next weekend at Talladega Superspeedway.

A fan photo of @JoeyGaseRacing scary wreck from Sunday. pic.twitter.com/ERBo0k4qPz 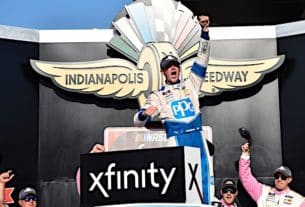 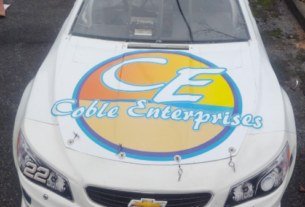 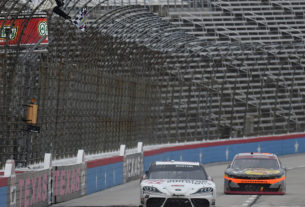