MARTINSVILLE, VA – The quest to become the first driver in the NASCAR Xfinity Series to finish their first three races in the top-two came up a couple spots shy for Ty Gibbs.

The 18-year-old Gibbs drove to the lead late in the final Stage. He maneuvered his No. 54 AutosByNelson.com Toyota Supra by Josh Berry to take the lead on lap 194. Although Gibbs took the lead, he couldn’t shake Berry. The JR Motorsports driver attempted to pass the grandson of Joe Gibbs before the caution waved for a spin by Alex Labbe.

On the final restart of the race, Ty Gibbs chose the inside. He quickly cleared Berry. However, the veteran Late Model racer was quick to give Gibbs a shot in turn three. Berry continued to shove the No. 54 until he finally moved him up the track on with 28 laps to go.

Gibbs attempted to return the favor a lap later. However, that opened the door to Noah Gragson. The duo banged doors several times over the course of the next lap or two. The Charlotte, N.C. native then slipped back behind Gragson and then his Joe Gibbs Racing teammate Daniel Hemric. When the checkered flag waved, Gibbs was fourth.

“We were just a little tight,” explained Gibbs. “I messed up there at one point, it was my fault. Then I hit the 9 (Noah Gragson), we were ‘dorking’ around there for a little bit. After I hit him and got kind of loose, it killed my momentum and kind of made me a little tighter. My fault.

“But overall, decent day, led laps. I feel like if I hadn’t hit him and knocked the nose in, we probably could have maybe got a third or a second or maybe even a first. Can’t complain. Had a good day and learned a lot today. It was a good time and Martinsville is fun. It tested my patience out.”

In the first Stage of the Cook Out 250 on Friday night, Gibbs climbed up from 16th to fourth. Before the second Stage could be completed, persistent downpours forced NASCAR to postpone the completion of the race to Sunday.

The fourth-place finish is the third consecutive top-five finish for Gibbs. It comes in his third career start.

Despite only three starts, Gibbs sits 15th in the points standings. Although not eligible for the Xfinity championship, he leads race winner Berry by eight points in the battle for Rookie-of-the-Year. Gibbs is 67-points ahead of the only full-time rookie that has started every race in the Xfinity Series this year, Ryan Vargas.

Gibbs’ next scheduled race is the Steakhouse Elite 200 on May 8, during NASCAR’s Throwback Weekend, at Darlington Raceway. 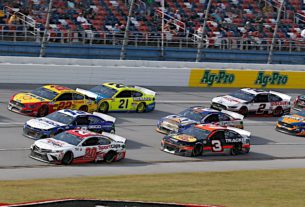 Erik Jones Sneaks By Mayhem for 2nd Place in Talladega 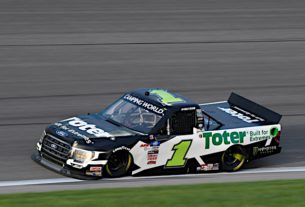 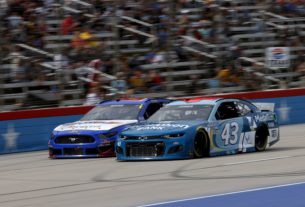