“When I retired from full-time driving I said it wasn’t the end, but the beginning of a new chapter. This is proof of that,” Stewart said during a press conference at Charlotte Motor Speedway’s Four-Wide zMAX  Dragway. “I appreciate all forms of racing and I’ve always been intrigued about drag racing and NHRA, in particular. Back in 2009 when Tony Schumacher and I were both representing the U.S. Army, I got to hang out with him and Don Schumacher at the U.S. Nationals. Tony ended up winning and after taking it all in, I was hooked. But it wasn’t until I met Leah (Pruett) and started going to races regularly, where I saw the strategy and the preparation firsthand, that I truly understood it.”

Stewart and Pruett are engaged to be married following the NHRA season-finale in Pomona, Ca. She is currently a Top Fuel drag racer for Don Schumacher Racing but will be leaving the team to race for Tony Stewart Racing Nitro, owned by her future husband.

“I’m new to the NHRA, but I’m not new to motorsports,” Stewart said. “We have good infrastructure in place and we’re used to building things from the ground up. It makes success that much more rewarding.

“None of this would be possible without Don Schumacher, he has done an amazing job of helping me understand the sport and understand what it takes to be successful at this level. Without Don, we wouldn’t be here.”

Pruett is currently in her 25th consecutive season competing in NHRA, which began in the series’ Jr. Drag Racing League as an 8-year-old. She won the 2010 NHRA Hot Rod Heritage Racing Series championship in the Nostalgia Funny Car class and has spent the last eight years advancing her way through Top Fuel. However, the Redlands, California-native is not confined to NHRA’s top class. The 33-year-old Pruett has pulled double duty for a number of years by also competing full-time in the NHRA Factory Stock Showdown, winning the title in 2018 for Don Schumacher Racing (DSR).

Pruett described the announcement of the new team as an “opportunity to build” and get back to the track and enjoy racing alongside Stewart.

“I’m an NHRA lifer and nitro racing is my passion,” Pruett said. “Don Schumacher gave me an incredible chance when we teamed up back in 2016. I’ve learned a lot from him and he’s made me a better driver. He helped me take a massive step in my career and this opportunity with TSR affords another big step. I’m forever grateful to all the individuals who I’ve been able to work alongside with at DSR. Don’s mentoring has prepared me for this new endeavor in more ways than just on the track.”

In the funny Car division, Stewart will put Matt Hagan behind the wheel. Hagan also races for Don Schumacher and is currently the reigning NHRA Funny Car Champion – a title he has held three times. He is also in the running to bring home his fourth championship, something he would like to do to close out his tenure with Schumacher.

“Tony, you know, he is the man and I am super excited to be a part of this,” Hagan said. “This next chapter with Tony Stewart is one I’m excited for. I’m ready to go racing. That’s what I’m here to do. I’m jumping into this new program with two feet and I’m confident in the package we’re bringing into the 2022 season with TSR. Let’s make some history. I can’t say how excited I am to be a part of history with Tony owning an NHRA team for the first time.

“Don Schumacher has been great to me and my goal this year is to deliver him another Funny Car championship. We’re in a dogfight and a lot can happen in three races. I want to go out on top.”

NHRA’s Glen Cromwell said this is a big day for the NHRA and all of its partners, “this is a big deal. I look at this team up here and to me, this is a team of superheroes. To me, you look at Tony Stewart and he is the Superman of motorsports, next to him you have Wonder Woman, who really grew up in the sport. Leah is a great ambassador for the sport. And next to her, you have Hulk Hagan over there who is leading the points over there and a three-time Funny Car Champion.”

Stewart joked that they have been working on cloning him so that he can attend the various forms of motorsports that he is involved in. From NASCAR to SRX to dirt racing to now the NHRA, Stewart confessed he would be busy but he was good at juggling his time.

“I hope Leah understands that after we get married, I will not have any off-weekends so our off-weekends will be during the week,” Stewart said. “I still plan on doing some racing, so I am not ready to hang the helmet up, yet.” 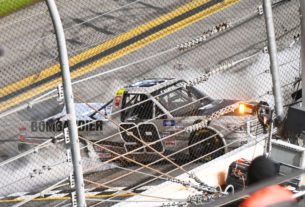 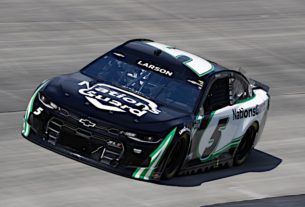 Kyle Larson “not disappointed or upset” after dominating, finishing second