The ARCA Menards Series heads to Avondale, Arizona this weekend for the General Tire 150 at Phoenix Raceway.

It has been over a month since the season opener at Daytona International Speedway where Corey Heim picked up his second career victory with Drew Dollar finishing the race in second. Bret Holmes, Ty Gibbs and Kyle Sieg rounded out the top five.

Heim currently holds a four-point lead over second-place Dollar in the point standings.

Friday’s race at Phoenix will be the second time the ARCA Series has visited the track, doing so first in March of 2020. In last season’s race, Chandler Smith took the lead late and held off Gibbs and Michael Self in a two-lap dash to finish the race. With Smith moving to the NASCAR Camping World Truck Series full-time with Kyle Busch Motorsports in’21, he will not defend his victory.

This was the last ARCA Menards Series race last season before the pandemic put the season on hold.

Last month’s Daytona victor Heim has earned his first two career victories back-to-back, winning the season finale at Kansas in 2020 and opening this season with the victory at Daytona. As noted above, Heim enters Phoenix with the point lead and the momentum of two victories.

Heim has two career starts at Phoenix in ARCA West including last November. In that race, Heim finished eighth driving for Venturini Motorsports, the same team he’s racing for this season on a full-time basis. With a minor bit of experience, Heim could very well take his point lead out of the desert and could continue his current streak in the ARCA Series.

Dollar has three career starts at Phoenix split among ARCA and ARCA West. Last November, Dollar earned his career-best West Series finish of fifth and is now running a partial schedule. Sitting second in ARCA points, that may change pending sponsorship of course and a win would be a sure way for Dollar to add races to his 2021 campaign. The first race that Dollar is slated to miss is the May 22 race at Toledo.

While ARCA took a month off, Ty Gibbs earned his first career Xfinity Series victory on the Daytona Road Course. The momentum from that victory brings Gibbs to one of his best race tracks. Last season, Gibbs led a total of 199 laps at Phoenix but fell short in both races finishing runner-up to Smith in the first race and David Gilliland in the West race last November.

In 2019, Gibbs led 38 laps en-route to his first and only ARCA West victory. Gibbs will for sure look to use Phoenix as an opportunity to take the point lead early.

Kyle Sieg and RSS Racing had a solid outing at Daytona finishing in the top-five in just his fourth career start. Now sitting fifth in ARCA points, Sieg comes to a track he has never raced at before. He can surely lean on his brother Ryan, who has 15 Xfinity starts at Phoenix. Going to a track that he’s never raced at before hasn’t stopped him from being successful so far in his early career, as he’s tallied strong finishes in his track debuts. Expect the No. 28 to run solid.

Jack Wood and GMS Racing have shifted their focus from the ARCA East championship to the ARCA Series. Wood will run the full season as GMS Racing looks for its first ARCA championship since Grant Enfinger picked up the title in 2015. Wood finished ninth at Daytona and enters a track where he has two career starts with the best finish of 11th in 2019.

Nick Sanchez was just in the wrong place at the wrong time at Daytona being caught up in the Big One along with Derek Griffith. Sanchez has some ground to make up but with the season still young, there’s plenty of time. Sanchez had a solid showing last season in his ARCA debut at Phoenix finishing sixth, currently his best finish.

After running solidly at Daytona before sparking the Big One, Gracie Trotter will return to the series with Venturini Motorsports. Trotter raced at Phoenix twice last season with the best finish of ninth in the November West Series finale. Trotter led eight laps at Daytona before sustaining some damage from the Big One. In returns to tracks, Trotter has improved, including a victory in her second race at the Las Vegas Motor Speedway Bullring.

One of the last times Taylor Gray raced on the West coast in an ARCA car, he earned his first career victory at Kern County Raceway Park. Gray has more experience than a lot of the drivers in the field as he’s raced in two ARCA East events running against Sammy Smith in what has brewed into a rivalry for the East championship. Gray finished third at Phoenix in last season’s West finale and will look to use that experience as he looks to earn his first ARCA victory.

Jesse Love will make his return to the ARCA Series kicking off his defense of the West championship with Bill McAnally Racing. Love has 17 total starts across the three ARCA Series, earning three victories in the West Series last season en-route to the Series championship. In four ARCA starts last season, Love finished a best of fourth with Venturini Motorsports at Winchester. He will return with Venturini Motorsports at Toledo.

Cole Moore will make his return to ARCA West after a brief hiatus. Moore was last seen in the series in 2017 and returns to McAnally, the same team he has run every race of his career with. Moore has eight career West starts with a best finish of seventh in both races at All American Speedway in 2017. Moore will run the full ARCA West schedule.

Rounding out Bill McAnally Racing’s stable at Phoenix will be 2019 ARCA West champion Derek Kraus, who has graduated to the NASCAR Camping World Truck Series with BMR. The youngster will make his ARCA debut. Kraus has 42 career starts in the West Series picking up 10 victories, 28 top-five, and 33 top-10 finishes.

Trevor Huddleston returns to Sunrise Ford this season after earning back-to-back fourth-place finishes in the ARCA West point standings. After earning two victories in 2019, Huddleston went winless in 2020 but still tallied seven top-five and nine top-10 finishes. Veteran Huddleston will be teamed with ARCA rookie Jake Drew. Drew has a solid reputation in both Go-Kart racing and Late Models with Sunrise Ford Racing.

West Series veteran Todd Souza returns behind the wheel of the No. 13 Ford Fusion. The 13-year veteran will be embarking on his 14th ARCA West season and in 88 starts,  has one career victory, 12 top-fives, and 45 top-10’s. He has nine starts at Phoenix with the career-best finish of seventh back in 2007.

2020 Truck Series Rookie of the Year Zane Smith returns with Steve McGowen. Smith competed in last season’s race at Phoenix and finished fifth. It was his first ARCA Series race since his breakout season in 2018 where he earned four victories, 12 top-five, and 13 top-10 finishes. He has two starts at Phoenix in his career with his best finish coming last season.

Entry List for the 2021 General Tire 150 at Phoenix Raceway 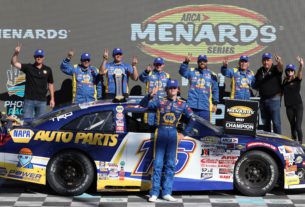 Gibbs Wins Race, Love the Tiebreaker Over Drew for the Crown! 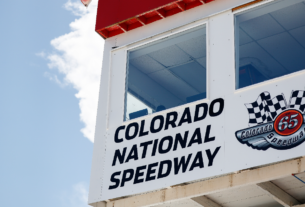 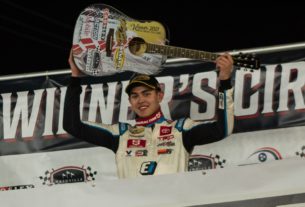