AVONDALE, AZ. – For NASCAR it couldn’t have played out better – Chase Elliott – the sport’s most popular driver drove from the back of the field after a pre-race inspection penalty, passed everyone on the track and held off the field to win the race and secure his first Cup Series title.

“I’m not sure that I still even know. I just, man, I’m at a loss for words. This is unbelievable,” Elliott said, when asked what it means to win his first Cup Series Championship. “Oh, my gosh. We did it. I mean, we did it. That’s all I’ve got to tell you. Unreal. Championship crew chief, Alan Gustafson, is now a NASCAR Cup Series champion, and very deserving. I just can’t say enough about our group. I felt like we took some really big strides this year, and last week was a huge one. To come out of that with a win and a shot to come here and have a chance to race is unbelievable. Heck, I don’t know. I don’t even know. This is unreal.”

Not since his legendary racing dad, Bill Elliott, edged out Rusty Wallace by 24 points to win the title in 1988 has the National Motorsports Press Association’s Most Popular Driver also secured the series championship – Chase Elliott now fills the shoes his father once word in that regard.

“Oh gosh, I remember a lot of that,” Wallace told Kickin’ the Tires following the race. “He is such a cool person and I race him for the title in ’88, I will never forget it. It was such a big, big day for both of us. But, I am just so proud for him and Chase. That’s what we were talking about on Motor Racing Network as we were wrapping up, it was such a great day with the weather being so good and the weather being so happy and Chase getting his first championship. I don’t have nothing but just wonderful things to say.

“You look at Dale Earnhardt and how popular he was and it went on down his son, Dale Jr., and then when Junior got out of the car and quit driving, and now you see Chase picking it up again. It’s not just that he is Bill’s son, he’s fast, he’s really quick on the racetrack, so he is really upholding that name.”

Wallace said it says a lot about Chase Elliott that Rick Hendrick signed him as a driver at age 14, without a sponsor and nothing but short-track experience speaks volumes about his talent.

Elliott held off Joey Logano for most of the final stage of the race at Phoenix, only losing point during green flag pitstops. He was roughly 1.5 seconds behind Logano when the field cycled through and began his move back to the front, taking over the lead on Lap 270 and never looking back. With 10 laps remaining in the race, he had amassed a 3.4-second lead over Logano, who was passed by his teammate, Brad Keselowski, a lap later. Denny Hamlin was in fourth – the final contender in the 2020 Championship4. In all, Elliott led seven different times during the race for a total of 153 laps.

“Yeah, just waiting on the caution, as always,” Elliott said. “You know, I saw Joey was pretty loose there and felt like I needed to get to him while I could. I knew I’d been kind of tight on a longer run and he was probably going to get a little better. Just unbelievable. I mean, I just never would have thought that this year would have gone like it has. I mean, NASCAR Cup Series champion; are you kidding me?  Unreal.”

As for Logano, he suffered a vibration multiple times throughout the day that zapped speed out of the car as he would go into the turns. He said, said he felt like he came out of the pits during the green-flag stop that he had a chance but Elliott’s car being so fast combined with the vibration left him behind.

“Our Shell‑Pennzoil Mustang was really fast and no one really did anything wrong,” Logano said, who finished third. “Our pit crew was on it. Our strategy got us out front there at the end. The 9 (Elliott) seemed like he really lit off pretty good there. That last run I was able to go really fast. And got another vibration towards the end of the run and lost the turn. Still a little free. Yeah, we were close, and you know, everyone executed and did their job, and that’s what we should be most proud of. And, also how far we’ve come from the beginning of the season until now as a team. A lot to be proud of. It stings not winning, I’m not going to lie, it hurts, but at the same time we’re stronger because we went through it.

“You don’t lose in these situations, you either win or you get stronger. We got stronger here today.”

Like Elliott, second-place finisher Brad Keselowski also expected a late-race caution that would have regrouped the field and possibly given him, or his Penske Racing teammate Logano, a chance to get ahead of Elliott on the restart. Unlike the two previous championship races this weekend – the NASCAR Gander RV and Outdoors Truck Series and the Xfinity Series,  where the caution flew with three laps to go in each race – the entire final stage of the Cup Series race went caution-free.

“Yeah, I would have liked to have had one of those late-race yellows like we saw in the Truck and Xfinity race,” Keselowski said. “I thought we were pretty good there, just didn’t have the track position to make it show. I thought we had a shot at the end of the second stage and just couldn’t keep it up in (a) spot to keep it where we could have a lead. Really proud of the speed we had. Just a solid day and just wish we had one more spot.”

For Hamlin, 2020 was a good year but the final race didn’t have the results he wanted. Heading into Phoenix, Hamlin had seven wins and was considered by many to be the favorite to take the title. He said his car just didn’t have enough speed to win. Despite not leaving the Arizona desert as the 2020 Champion, he had a great year.

“No one has won more than we have over the last two years, so Daytona 500 two years in a row, Final 4 two years in a row,” Hamlin said. “Pretty proud of what this team is doing and what we’re building towards. Proud of the effort. We’ll come back and do it again next year. Looking forward to it. We’ll win as many races as we possibly can to get ourselves back in Phoenix again and with another shot. But proud of this whole Joe Gibbs FedEx team for giving me cars that are capable of winning every week.” 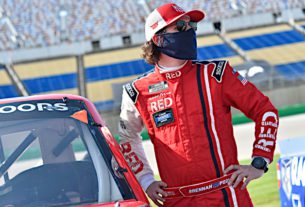 Brennan Poole returns to On Point Motorsports at Texas 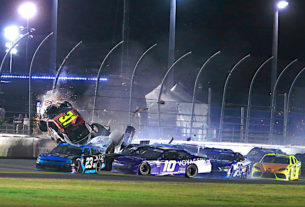