The 2020 Season Finale 500 at Phoenix Raceway capped off 19 full-time seasons for Jimmie Johnson in the NASCAR Cup Series.

Prior to the start of the 2020 NASCAR Cup Series season, Johnson announced that he would step away from full-time competition. The Hendrick Motorsports driver earned 83 victories and seven Cup Series championships over the course of 19 years. Recently the 45-year-old announced that he would compete part-time for Chip Ganassi Racing in the NTT IndyCar Series starting next season.

Entering Phoenix, Johnson last earned a top-five finish at Dover International Speedway. The driver of the No. 48 Ally Chevrolet Camaro ZL1 1LE started the race in 26th after the metric qualifying formula. The speed of the Hendrick Chevrolets was evident as William Byron, Chase Elliott, and Johnson climbed up through the field.

The El Cajon, Calif. native briefly took the lead during a round for green flag pit stops in the second Stage. Johnson remained in the top-10 throughout the rest of the race. In the closing laps the veteran closed in on Ryan Blaney for fifth. With 21 laps to go, Johnson swept by for the final top-five finish of his full-time Cup Series career.

“Excited to do this, excited to get on track and have this final event,” Johnson reflected. “For me the hardest point was about this time last year when thoughts were heavy on my mind and I was going to make the decision and made the decision to myself and my family, then had to go to Rick’s house and talk that through with Mr. Hendrick.”

“So that point in time was probably the most emotional and most difficult. And as the year has gone by, many moments of reflection and just pride. Then all of that rolled into today and just very excited to be on track.”

The top-five finish was the fifth for Johnson in 2020 and the most he has earned in a single season since his seventh championship in 2016. Despite three wins in 2017, Johnson uncharacteristically struggled. Those struggles continued as he went winless for the first time in his career in 2018. In 2019, he missed the Playoffs for the first time.

The 2020 season saw several flashes of brilliance and competitiveness for Johnson. However, the same familiar struggles that he and his No. 48 team have faced in recent years continued.

Between the victories, record-tying championships, and Hall of Fame career, Johnson was just happy to be competitive in his final race.

“It was nice to be competitive out there and run the top 5, finish in the top 5, but my bucket is full,” admitted Johnson. “NASCAR has been so wonderful for me. This journey has been more than I could have ever dreamed of or expected or hoped for.

“The last couple years on track weren’t as I dreamed up, but I’ve experienced the highest of highs and worked with the greatest people, been with one team through this entire journey, and just very thankful for all the people that have helped me get here.

All those emotions and all that pride rolled up into just a huge smile today walking out on the grid.”

In Johnson’s final full-time NASCAR start, his Hendrick teammate, Elliott won his first championship. Similar to the multi-time champions’ seventh and final title, Elliott had to win after starting from the rear.

Post-race, Johnson performed a ‘Polish Victory Lap,’ driving in the opposite direction. He let Elliott perform donuts and burnouts, while he waved to the crowd. Johnson stopped to give his teammate a high-five before driving on to pit road.

Johnson explained that the ‘passing of the torch’ feel went through his mind pre-race.

“That’s what went through my mind today when I heard they were going to the back,” Johnson stated. “I sent Alan and Chase a text and reminded them that I won a championship that way. Then I saw Chase just before the trucks rolled, just before the driver intro part of the ceremonies this morning, and I reminded him, I’ve been there.

“Of the championships I’ve won coming from the back, I had less nervous energy in my body when I took the green flag and it was very easy what I needed to do. I shared that with him, and he smiled, and he said, ‘I hope that’s how it goes today.’ And it did. We didn’t think of it as a passing of the torch, but I tried to share some of my experience with him before the race.”

As this chapter of Johnson’s racing career comes to an end another begins. Next year, he will drive the No. 48 Carvana Dallara on road courses for Chip Ganassi Racing in IndyCar.

“I was able to drive the car on Monday in Alabama at the Barber racetrack,” said Johnson. “Learned a lot, and I know the areas that I need to work to be more competitive in those cars.

“I’m also traveling tomorrow to Monterey, California. We’re testing there on Tuesday, so I get another shot at testing the car and getting a feel for things. I’m integrated into the team. Certainly, more throughout the off-season will take place. Their season just finished and obviously ours did, as well.”

“But I’m plugged in over there and trying to learn what I can and just trying to make the switch from a car with very little downforce to a car with a lot of downforce. I have a big challenge ahead of myself.” 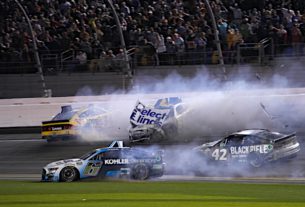 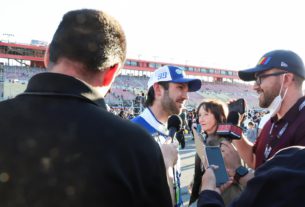 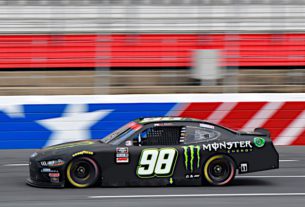