Skip to content
Home>NASCAR>Corey LaJoie: ‘Every week is going to be a better opportunity’

LaJoie’s ninth place finish marked his third career top-10 finish in Cup competition at The World Center of Racing and fourth top-10 overall. It also sets him up with a solid starting position of seventh for tomorrow’s O’Reilly Auto Parts 253 at Daytona.

“It [certainly] started us off on the right foot. And I think it builds some momentum,” said LaJoie. “We have a great starting position this weekend. We’re starting seventh. So, I’ll have at least six people in front of me to slow me down before I get to Turn 1. I’m certainly not a road course ringer. I have a little work to do on that. But it would be good to learn from the guys in front of me and to see what we can do this weekend.”

With Chip Ganassi Racing chassis and Hendrick motors under the hood, LaJoie stated that the equipment gives him better opportunities to show what he is capable of.

“I [think] every week is going to be a better opportunity for me to show what I’m capable of doing behind the wheel just because we have some up-to-date, current cars; and our motor package is on the same platform as some of the other guys,” LaJoie said.

One goal LaJoie has is to earn a Top-20 on all road courses. When the Cup Series visited the Daytona Road Course last August, LaJoie finished the event in 32nd after starting 29th.

“I think I only have four or five road courses under my belt in my whole life,” said LaJoie. “I’m trying to mitigate the losses there but I’m excited to get to Vegas, Homestead, Phoenix, and Martinsville; and some other places that I’m familiar with and really see how we stack up. Because I think that with all that we learned last year working with Ryan Sparks, he kind of knows what to look for in these race cars, We can add it to a lighter car; make some more downforce with some better motors, and I think we’re going to be a force to reckon with.”

LaJoie saw solid finishes when the series first visited Las Vegas and Martinsville last season with finishes of 16th and 18th under his belt. Both results tied previous best finishes in the Cup Series for LaJoie at those tracks.

This weekend, LaJoie will seek to learn as much as he can from the guys at the front of the pack, stating the biggest challenge of the road course will be ‘everything’.

“The whole turn left, turn right, stop, go, all of that is fairly hard,” said LaJoie. “You’ve got guys that have been doing it for a while with more road course experience than others and I’m probably at the bottom end of that experience line.

“I’m going to certainly learn as much as I can from those guys at the front of the pack this weekend with my seventh starting position. Just try to keep all four on the black stuff instead of the green stuff and try not to make any mistakes. I think keeping the brakes on this low downforce package will be important to be there at the end because it’ll be a lot longer than the Clash was.” 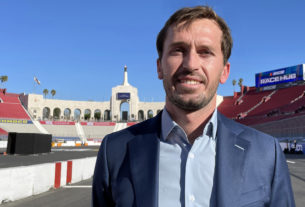 Take the Racing Internationally and Spread NASCAR Around the World 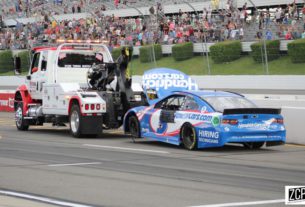 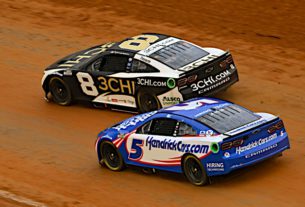