Early in the final Stage of the Bank of America ROVAL 400, contact between Elliott and Kevin Harvick sent the No. 9 NAPA Auto Parts Chevrolet Camaro ZL1 1LE into the wall between Turns 7 and 8. The two Cup Series champions had a war of words at the end of the Bass Pro Shops NRA Night Race at Bristol Motor Speedway several weeks ago. Contact there cut Elliott’s tire, to which he retaliated, positioning his car to aid his Hendrick Motorsports teammate Kyle Larson.

Fast forward to the Charlotte Motor Speedway Roval, Elliott’s title defense appeared to be over. After a spin in Turn 8 and contact with Cole Custer, the Dawsonville, GA native limped back to pit road. The Alan Gustafson-led crew repaired the right rear corner of Elliott’s Chevrolet. NASCAR’s Most Popular Driver for the past three consecutive seasons was 13-points out once he returned to the racetrack.

Eventually, the rear bumper back flew off the car, bringing out a caution with 21 laps to go. Caught back up to the field, Elliott worked his way forward. The 25-year-old maneuvered his way up to 15th, just behind Harvick. Entering Turn 1 with 10 laps to go, the No. 4 Mobil 1 Ford Mustang locked up the tires and pounded the outside wall.

“Our team did a really good job of putting our car back together,” explained Elliott. “That was really the bottom line. We took the allotted amount of time to fix it properly, not have any more tire rubs and end our day completely. Excited about that, three more weeks, and an opportunity to win a championship. The good news is we (the No. 9 team) have been fighting together for a few years now. We understand what’s important to us.”

Post-race, Elliott appeared to believe the feud between himself and Harvick was over. When pressed for his opinion on the incident, he repeatedly focused on the next round of the playoffs and Texas Motor Speedway.

“I don’t have anything to say about it,” stated Elliott. “Excited to be moving on. I’m heading to Texas next week, focusing on my job.”

Aiding Elliott in his escape from playoff elimination was a win in Stage 1 and a runner-up in Stage 2. The stage finishes added 19-points to his tally.

After the reseeding for the Round of Eight, Elliott sits sixth on the playoff grid. He’s two points behind the cutoff, held by Ryan Blaney. Elliott is 43-points behind leader, race winner, and teammate Larson. 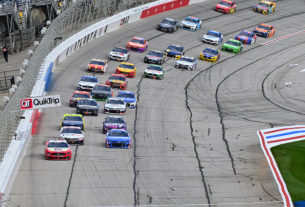 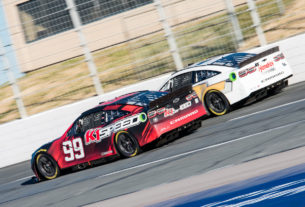 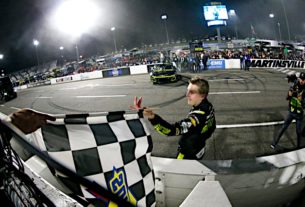