Entering the Food City 300 at Bristol Motor Speedway, Cindric was locked in a battle for the regular season title with AJ Allmendinger. The duo matched each other in Stage points, keeping the gap at just five points.

In the final Stage of the 300-lap race, a late caution for spins by Sam Mayer and Josh Williams set up an overtime restart. Allmendinger lined up third, behind Justin Allgaier. While Cindric and Allgaier battled for the lead, the Kaulig Racing driver took advantage to leapfrog the duo. Allmendinger also made contact with the battling duo.

Then, Allmendinger overdrove the final corner, sliding up the banking. Cindric dove through attempting to take the lead. The short track racing move resulted in both the Team Penske driver and Allmendinger spinning across the line. Cindric took the checkered flag 0.082 seconds behind his regular season championship rival. Both Allmendinger’s Chevrolet and Cindric’s No. 22 Menards / Richmond Ford Mustang ricocheted off the inside wall and back into traffic, collecting several after the checkered.

ARE YOU KIDDING ME!?@AJDinger crashes, and wins anyway at @BMSUpdates! The win makes him the @NASCAR_Xfinity regular season CHAMPION! pic.twitter.com/BEYxVHfgcg

“What happened on the last lap?” asked Cindric. “The short summary is short track racing. The long summary is a lot of contact. Five-star bodies definitely made their money’s worth today. I’m surprised we were able to not cut a tire down in that situation, but just a lot of hard racing, a lot of guys wanted to win the race. I feel like, and I say with confidence, we were probably the ones that deserved to, but that’s not how these play out with these green-white-checkers and sometimes you’re vulnerable.

“I would say that was the exact same thing AJ did on the bottom of turn four the lap prior, just gassing up out of desperation. It was a bit desperate, but monkey see, monkey do in that situation. I don’t want to tear up race cars and can’t say I’m the one that instigated any of that. I had a shot to win. Love to see the margin there of two cars crashing across the finish line, but really close two years in a row.”

The regular season rivals started side-by-side in ninth and 10th due to NASCAR’s metric qualifying formula. In Stage 1 Cindric finished seventh, one spot behind Allmendinger. Then in Stage 2, the duo swapped places with the Ford Performance driver in fifth.

After the points reset for the Xfinity Series playoffs, Cindric and Allmendinger are tied for the lead. The Team Penske driver has the tiebreaker with five victories this season to Allmendinger’s four. Both drivers are 36-points about the playoff cutoff, held by Harrison Burton. 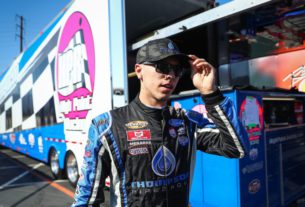 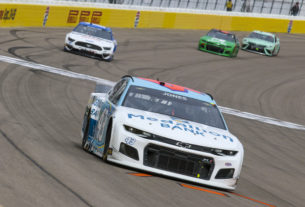 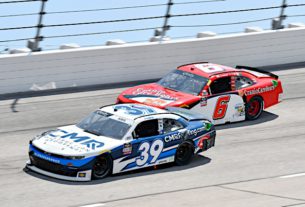