After nicknaming himself ‘the Darkhorse,’ Justin Haley end the 2020 NASCAR Xfinity Series season third in the championship.

As a round of green flag pit stops took place in the final stage of the Desert Diamond Casino West Valley 200 at Phoenix Raceway, Haley was running fourth of the Championship 4 drivers. The driver of the No. 11 Leaf Filter Gutter Protection Chevrolet Camaro SS followed his championship rival Justin Allgaier onto pit road.

As the other Championship 4 contenders pitted, Haley found himself still fourth in the battle for the championship. Before the green flag pit cycle could be completed, the caution waved for Joe Graf Jr. Austin Cindric and Allgaier were on the lead lap while Chase Briscoe earned the free pass. Haley was forced to take the wave around.

The Kaulig Racing driver passed Briscoe, but lost contact with the other two Championship 4 contenders. With three to go, the caution waved when Briscoe spun. The driver of the No. 98 HighPoint.com Ford Mustang, Cindric, and Haley pitted.

On the restart, Cindric surged forward and battled with Allgaier and Noah Gragson. Meanwhile Haley fought off a charge from Briscoe. Despite contact between Allgaier and Cindric, the duo hung on. Cindric went on to win the race, and the Xfinity Series championship, while Haley crossed the line in eighth, third in the championship.

“Missed it early but had speed late and then strategy didn’t pan out,” explained Haley. So proud of this Kaulig Racing team and everyone at Leaf Filter for believing in me. 20 some employees and we gave it our all.”

Missed it early, but had speed come late & then strategy didn’t pan out. BUT SO PROUD of this @KauligRacing team and everyone at @LeafFilter for believing in me. 20 some employees and we gave it our all. I’ll see ya in Daytona. 👍🏼 Congrats @AustinCindric!!

Although Haley congratulated Cindric on the championship, he did have to poke some fun at the Team Penske driver during his post-race interview on NASCAR on NBC.

“Congrats to the 22 team, but it sucks that they won the championship because we share a plane.”

Haley ran the lowest of the Championship 4 contenders throughout much of the first two Stages. He finished the first two stages in seventh. However, the race was not completely normal for the Winamac, IN native. Every pit stop, the crew that serviced Haley’s car was different from the traditional Chip Ganassi Racing No. 42 Cup team.

The eighth-place finish was Haley’s 21st top-10 finish this season and the 41st of his Xfinity Series career. It also marks a career-high single season mark for top-10 finishes for the 21-year-old. 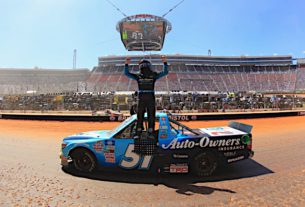 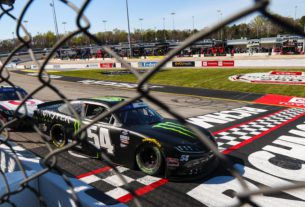 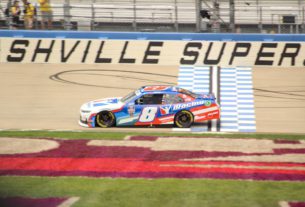 Berry caps off his JRM run with top-five at Nashville