Hampton, Ga. (April 13, 2021) Something very unexpected has resulted from Supercross’ unique 2021 race schedule. A calendar heavy with triple-headers, something not done in the sports’ 47 year history prior to the pandemic. The condensed schedule was designed to ease stress on riders and teams while also creating a “race bubble” environment that would allow fan attendance. What it’s done is delivered compelling evidence that riders have a unique relationship with each race venue.

The Supercross tracks are extensively altered during the triple-headers, often changing direction between events; only the dirt and stadium remain constant. But added to track layout are so many other variables such as riders’ physical performance, motivations, and emotions as well as mechanical issues, how the track breaks down through the night and of course the rider’s starting position at the beginning of the Main Event. It seemed back in January that the triple-headers would have a negligible effect on which rider won. But the result has been very different.

The triple-header in Houston that kicked off the 2021 season delivered three different winners, as would be somewhat predictable. But then one rider, Honda’s Ken Roczen, grabbed three wins in a row at the next venue, Indianapolis. It raised some eyebrows, but most attributed it to a new motivation after some tough point losses in Houston. Certainly it wasn’t the first time one rider started a win streak in a season.

The series next moved to a two-race stand in Orlando. Roczen’s win streak was broken, and another started. Cooper Webb, the 2019 champion, took both wins on his KTM. Then Webb’s streak was broken at the only single-race venue on the schedule, the open and fast track built across the infield at Daytona International Speedway. That win was grabbed by defending champion Eli Tomac on his Kawasaki.

Going into the third triple-header in Arlington, Texas, Tomac had momentum and was motivated to regain points, Roczen was ready to battle to retain his points lead, and Webb was hungry, only two points out of the title lead. All three were well motivated and, as far as anyone outside the teams knew, healthy. But the three rounds at Arlington fell again to one single rider. It was Cooper Webb’s second streak, and it put him into the points lead.

But Webb’s streak was yet again broken on Saturday night at the first of three races on the infield of Atlanta Motor Speedway. Tomac grabbed the win convincingly on the red Georgia soil at the open air venue. Will Tomac run Atlanta? The high-speed tracks and open-air conditions suit him. Or is there something more to it?

Athletes have a ‘feel’ for places, and maybe that positive feeling is the nth degree difference these top athletes win and lose by. It’s an intangible force that’s never seemed so apparent in Supercross before this year. If there is something to the rider/locale relationship, Tomac could use the points boost. He has 36 points to make up with only four rounds remaining. Or maybe Roczen can break the trend and claw back some of the 22 points he needs to earn his first 450SX Class title. Cooper Webb is not a rider to go into season management; he’s very motivated to stretch his points lead.

There are two rounds left this week in Atlanta: SuperTuesday tonight, and then this Saturday, April 17th. Then the series wraps up with two races inside Rice-Eccles Stadium in Salt Lake City, Utah. A final double-header to cap off a season that’s possibly revealed a stronger bond between Supercross athlete and venue than has ever observed before.

Time will show how it plays out in the championship points battle. But if you believe in patterns watch for Eli Tomac to pull off two more wins in Atlanta. To see for yourself, ticket information to attend one of the four final races, and viewing information to catch the racing on the Peacock app and on NBCSN are available at SupercrossLIVE.com. 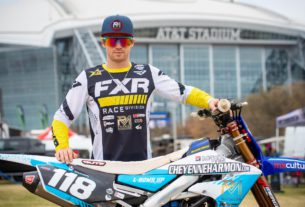 Supercross and Country Music – A Love Affair Made in Texas 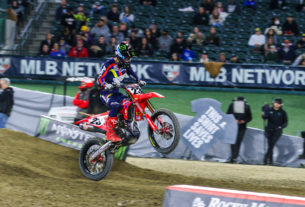 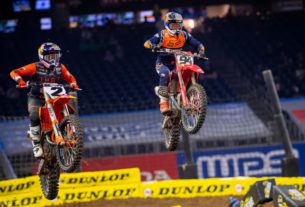 Texas Rematch: Sparks are Sure to Fly at the Arlington Supercross Triple-Header