There’s one rider right now that knows how to kick off their season, and that would be Justin Barcia. With a new team, the Troy Lee Designs / Red Bull / GASGAS Factory Racing competitor snagged the center step at Houston 1 in the 450SX class to start out the 17-race 2021 Monster Energy AMA Supercross Championship.

“I felt like I needed to do that tonight,” said Barcia with a big smile after the race in a Zoom conference meeting with the media. “Once I won that heat race, that felt really good and relieved some pressure. I would have been happy with any podium position, but to win it is just icing on the cake.”

Marvin Musquin edged out Barcia for the holeshot by a wheel, but Barcia beat him to the next corner and never looked back. It was Barcia’s fifth career Supercross victory in the 450SX division, leading all 28 laps in the first season opener outside of California since the 1990s.

“Like Kenny (Roczen) said, it’s the first race and he probably could have made a pass. We’ve grown up a lot, and we’ve got a long season ahead of us. We need to be smart, but he kept me on my toes for sure.”

Sharing the podium were Ken Roczen and Musquin. Roczen put some pressure on Barcia with some side-by-side action and set the fastest lap of the event on Lap 3, but wasn’t able to complete the pass and settled for a second place result.

“You gotta pick your battles,” Roczen shared to explain some of his pass attempts. “When the ruts get deep and they’re tacky like that, you don’t want contact there. If we both go down, then we’re both going to be mad and it just doesn’t really help us. If I felt like I had the edge on (a pass), I think I could have made it happen. If (Barcia) doesn’t expect it, we’d both go down so that’s just how I thought of it.”

Last year’s champion Eli Tomac had two separate incidents — a fall and an off-track slide — with Vince Friese. Tomac would finish 13th as the last rider on the lead lap.

The gate drops for Round 2 of the 2021 Monster Energy AMA Supercross Championship at NRG Stadium in Houston, TX on Tuesday night, January 19. 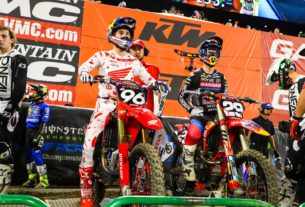 Hunter Lawrence “All Okay” After Frightening Crash at Anaheim 3 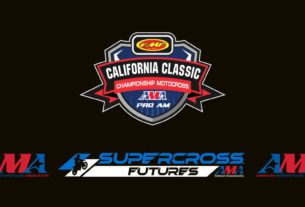 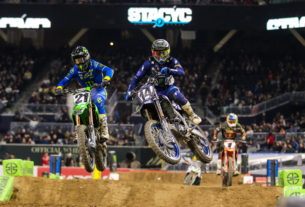 Dylan Ferrandis Finds the Podium at San Diego in 450 Supercross