A little over two years after his last victory, Logan Clampitt returned to victory lane in the eNASCAR Coca-Cola iRacing Series.

The William Byron eSports driver took the lead on the only restart of the race on lap 53. Clampitt maneuvered by rookie Mitchell deJong to pit the virtual No. 97 Logitech Gaming Chevrolet Camaro ZL1 1LE in front. From that point on, Clampitt controlled the tempo of the race.

Although there was an incident on the backstretch that sent both Ashton Crowder and Brian Schoenburg spinning, the caution never waved. The caution-less accident allowed a round of green flag pit stops to take place unabated. Following the green flag pit stops, Clampitt’s teammate, and defending eNASCAR champion Nick Ottinger became his main competition.

Ottinger ran down his teammate. However, the abrasive track surface quickly negated the tire advantage on the virtual No. 25 Logitech Gaming Chevrolet Camaro ZL1 1LE.

Isaac Gann appeared to be the only other driver with the speed to challenge the William Byron eSports duo. However, internet connection issues forced Gann out of the race in the late stages, relegating the 2020 eNASCAR iRacing Pro Series champion to a 39th-place finish.

When the checkered flag waved, Clampitt had over a two second advantage on Ottinger. Williams eSports driver Zack Nichols was the rookie of the race, taking the checkered flag in third. Clampitt’s roommate, and Daytona winner Michael Conti, finished fourth with Steven Wilson fifth.

Clampitt was emotional as he took the checkered flag.

“This is so emotional,” admitted Clampitt in victory lane. “It’s been two and a half years, 44 races … this is amazing. I moved out here (to North Carolina), with Michael (Conti) to change my life. This game (iRacing) has changed my life so much. Tonight was special. It’s my first win being away from my parents. I’m glad I have my friends to celebrate with because they’re all like family. I love them all.

“We put so much time into this series. So much has gone on the past two and a half years. When I was crossing the line to take the white flag, it didn’t even feel real. It’s very hard to win in this series, but thankfully we got the right strategy in place, made the right adjustments on the last pit stop there, and qualified up front to put ourselves in position to win.”

The win marked Clampitt’s third in eNASCAR Coca-Cola iRacing Series competition. He is the fourth different winner this season. Pending more winners, Clampitt is currently locked into the eNASCAR Playoffs.

The only caution of the night came when Gann’s Kligerman Sport teammate, Bob Bryant attempted to hit pit road on lap 49. Richmond Raceway eSports’ Zack Novak had nowhere to go and slammed into the virtual No. 77 Chevrolet. Bryant spun down the frontstretch as many took evasive action. Malik Ray and a handful of others collected damage in the incident.

The eNASCAR Coca-Cola iRacing Series will be back in action as the only NASCAR sanctioned series this season to visit the (virtual) 2-mile Auto Club Speedway on March 30.

Caution Flags: One for three laps. 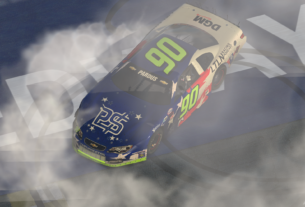 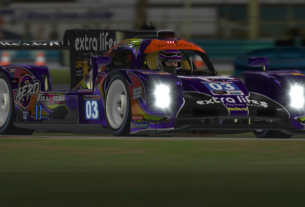 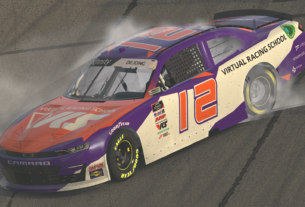