The domination that James Davison accomplished at the virtual Chicago Street Course was more reminiscent of a Formula 1 race than one from the NASCAR Cup Series.

Davison pulled off ‘the hat trick,’ winning the pole, leading every lap, and scoring the fastest lap of the eNASCAR iRacing Pro Invitational Series. His virtual No. 15 Greatest Generations Foundation Chevrolet Camaro had no competition.

The high attrition and early wrecks allowed Davison to steadily increase his lead, despite cruising around the 2.19-mile virtual track. By the time the green flag pit cycle was complete, Davison’s lead was over 34 seconds. When the checkered flag waved, he was a staggering 56 seconds ahead of his Rick Ware Racing teammate Josh Bilicki. Justin Haley was the only other driver to finish on the lead lap. Garrett Smithley and Martin Truex Jr. rounded out the top-five.

“I knew I had to get through turn one,” explained Davison. “I had the torpedo (Alfredo) come in there. Saw everyone get caught up in that. That was a bit of a shame for the show. I just want to thank NASCAR and iRacing for the amount of effort that they went to put this event on. I’d love to see a street race, I’m sure it would be more exciting than [this].

“Good bit of fun for us, good night for Rick Ware Racing, The Greatest Generations Foundation. I just need to thank my spotter (Blake McCandless) for getting me through all of that carnage.”

Timmy Hill and Matt DiBenedetto finished sixth and seventh after a spirited on track battle. They were the final drivers one lap down. Ross Chastain and Quin Houff were two laps down in eighth and ninth. Completing the top-10 was Joey Logano, three laps down. In total, less than half of the competitors finished the eNASCAR race.

A variety of issues led to the high attrition rate at the virtual Chicago Street Course. With only two resets at their disposal, several drivers, including Aric Almirola, Alex Bowman, Chase Briscoe, Chase Elliott, Ty Gibbs, and Kyle Larson were out of the race in under five laps.

NASCAR’s Next Gen car proved to be a formidable challenge on the narrow, bumpy street course. The off camber corner exits at the virtual Chicago Street Course are polar opposite to the vast majority of active NASCAR tracks.

“iRacing did a really good job of [recreating the crown in the road, off camber corner exits],” explained Davison. “It’s quite tricky to get the power down without the rear getting loose. I think it would be fantastic if we ended up racing on the streets of Chicago, or Southern California. We will put on a better show.”

The NASCAR Cup Series drivers that are not well versed with iRacing struggled for another reason. As Logano mentioned on the FS1 broadcast some drivers didn’t have the same ‘seat of the pants’ feel. Unable to gauge whether the rear tires were sliding, several spun on corner exits.

The FS1 broadcast hampered the overall understanding of the race as a whole. Using Formula 1-style intervals (intervals between each car rather than behind the leader), knowledge of who was and wasn’t on the lead lap, let alone still on track and in the race, was vague.

Outside of a track-blocking crash caused by Ryan Newman, and a spin for Logano few, if any replays were shown.

Updates from teams and drivers on Twitter revealed that several, including Chris Buescher, Kevin Harvick, Erik Jones, and more had run out of fast repairs and were done for the night. 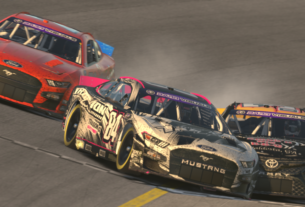 Mullis conquers the Hard to Drive 300 at Atlanta