SONOMA, CA – Chase Briscoe entered the General Tire 200 for track time in his first attempt at the technical road course of Sonoma Raceway. Zane Smith used the off-weekend from his full-time NASCAR Camping World Truck Series schedule to compete in central California. Both drivers held the top two positions in the only practice/qualifying session a couple of hours before the 50-lap race.

But after a late yellow in the session, the field had just one lap to set a qualifying time, and two drivers took full advantage of that.

When the clock hit 60 minutes, the session expired and saw a new front row with polesitter Jake Drew and Todd Souza knocking the NASCAR Cup Series rookie and the Truck driver back to the second row.

“It feels amazing,” Drew exclaimed after snagging the General Tire Pole Award in the ARCA Menards Series West race. “These guys work so hard for me. I think we were good throughout practice. This place wears out tires so fast, it gets so greasy. We were in some traffic early on in the tire life, so we missed that fast lap. But I was pretty confident when we put new tires on, we were going to have a good shot at the pole. We really played it out well with the timing, getting a good space on track and I was able to lay it down.”

For Drew, it seemed simple enough with a lap time almost a full second faster at 1:41.848. With his karting background and practice earlier this year at Buttonwillow Raceway Park, the 21-year old has solid experience turning right as well.

“I know the stock car is much different than a go-kart, but I had so much experience in that where I was able to translate that into this car and learn the weight transfer and the power. Learning how to conserve the tires, and hopefully, I can put it all to good use.

“Obviously Buttonwillow was a huge confidence boost to be able to have a good couple of test days. I’ve just been waiting for this day to come for so long now, so I’m excited to be here.

The green flag dropped with Drew and Souza leading the field. Race officials claimed Souza jumped the start, creating an uphill battle for the No. 13. After Briscoe passed him for the lead, some expected the Cup rookie to walk away from the ARCA rookie. It was far from the truth, as Drew stayed within a couple of seconds the entire first half of the race.

After the mid-race break, the field took the green again with an eventful second half. Briscoe continued to dominate, but not without a mirror full of Drew and Dylan Lupton who fought his way up to third. Lupton and Drew battled back and forth until a late-race yellow bunched up the field again. Drew got the short end of the stick on the restart when he was pinballed by multiple cars, eventually running off track with Dave Smith. Smith couldn’t get rolling again, but Drew was able to avoid being hooked into the wall and continued on. Despite the damage, Drew was able to climb back up to seventh when the checkered flag flew.

“We fought hard all race,” said a dejected Drew. “We tried to learn as much as we could, I don’t think we were quite there, but I think we had a really good shot there at second. Those late-race restarts, everybody was just super aggressive, and sadly we got caught out by some guys just fighting for stuff that wasn’t really there. That’s how it goes. Some days you win, some days you lose. We’ll get it fixed up and we’ll come back. All this stuff is still new to me, so we’ll keep learning and keep progressing.”

His rookie season may look lackluster with an 18th place finish at Phoenix Raceway back in March and a seventh overall today at Sonoma. However, his battles up front are soon to pair with his finishes.

And cleaning up points might not be as difficult for the California native. As predicted in the Kickin’ the Tires preview, his strong runs have proven he belongs in the ARCA Menards West series. Pairing his humble approach with the ability to learn from competitors like Briscoe gives him a bright future.

“I still got a smile on my face. I was having tons of fun out there, obviously a huge opportunity to do this for Bob Bruncati and Maurine, his wife. Everybody at Sunrise Ford and the shop, Mike, Dennis, Chris, Bill. My crew chief Jeff Schrader, he worked so hard to get this thing right, and I can’t thank those guys enough.”

After the puzzle is complete with all the pieces put together, he hopes fans will start to know his name soon.

“I think we’re going to be a pretty big contender wherever we go here pretty soon.” 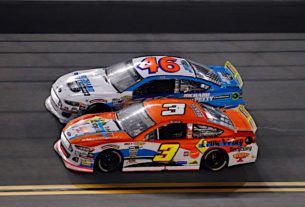 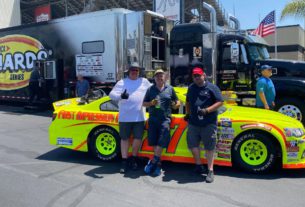