PENSACOLA, Fla. – Based on the way he barely lost the ARCA Menards Series East season-opener to fellow rookie Max Gutiérrez a few weeks ago, Sammy Smith’s eventual first win on the platform felt like an inevitability.

It became a reality Saturday night at 5 Flags Speedway in Pensacola, Florida, where the 16-year-old from Johnston, Iowa, won the Pensacola 200 Presented by Inspectra Thermal Solutions in convincing fashion.

How about that???@sammysmithSS's first ARCA Menards win comes at @5FlagsSpeedway

Smith, who earlier Saturday earned the General Tire Pole Award when he put the No. 18 Engine Ice Toyota on the top of the speed chart toward the end of an open qualifying session, finished ahead of second-place Mason Diaz by more than two seconds on the half-mile paved oval.

“I can’t thank the team enough,” said Smith, who is driving for Joe Gibbs Racing in the ARCA Menards Series East this season. “The first part of the race, we weren’t very good. We were alright. But we fought back and made some good adjustments.

Smith’s win Saturday at 5 Flags served as redemption for the race that got away from him almost three weeks ago at Florida’s New Smyrna Speedway. Smith led a race-high 78 laps in the season-opener before a late penalty shuffled him back. He ended up part of a three-wide race to the win, which went to Gutiérrez.

Smith again led the most laps (145 of 200) in the second race of the 2021 season, this time finishing the job after maintaining the lead on a restart with 14 laps to go.

“It really makes up for New Smyrna,” said Smith. “I feel like we should have won New Smyrna, and circumstances happened. But tonight I think is a good redemption, and here we are.”

Diaz, who is running full-time in the ARCA Menards Series East for the second consecutive season, earned a new career-high with his second-place finish. This after he finished fourth in the 2021 opener at New Smyrna.

“After the last restart there I thought I had a chance (at) him,” Diaz said of Smith, who pulled away on the final restart. “(Restarting is) always better on the bottom here. We got a good restart and were able to hang with him, but sadly going into Turn 3 I went too shallow and just washed up the track a little bit and he got away from me.”

Taylor Gray finished third after leading 53 laps Saturday. He spent the last 45 laps of the race recovering from contact with the wall after he and fourth-place finisher Rajah Caruth collided while battling for position.

Smith now leads the ARCA Menards Series East championship standings by eight points over Gray. Gutiérrez, Diaz and Iest are third through fifth in points after two of eight races.

The ARCA Menards Series East gets a lengthy break before its next race, the May 8 running of the Nashville 200 at Nashville Fairgrounds Speedway. That race is scheduled to stream live on TrackPass on NBC Sports Gold.

A delayed broadcast of Saturday’s Pensacola 200 Presented by Inspectra Thermal Solutions is scheduled to air Thursday, March 4, at 11 p.m. ET on NBCSN. 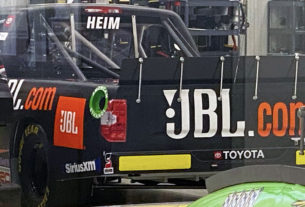 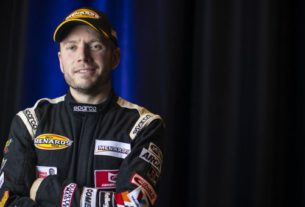 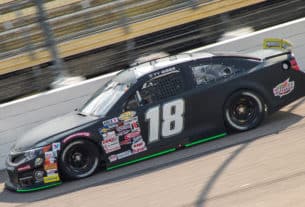