As part of his ‘Not Gaughan Yet Tour,’ Brendan Gaughan scored a top-10 finish in his final NASCAR Cup Series race at Daytona International Speedway.

With the chaotic nature of superspeedway racing, Gaughan’s No. 62 South Point Hotel & Casino Chevrolet Camaro ZL1 1LE ran in the back of the lead pack for much of the race. The Beard Motorsports driver competes part time, and the 2020 season is his final before he steps away from NASCAR’s top series.

Gaughan avoided not one but two ‘big ones’ in the closing laps. The Las Vegas, NV native missed a 10-car pileup off turn four with nine laps to go. Gaughan then missed an 11-car accident in turn one with two laps to go.

In overtime, Gaughan restarted at the back. He navigated through the field with fellow Chevrolet drivers Alex Bowman and Bubba Wallace. Gaughan missed Clint Bowyer’s last lap accident and was ahead of two additional last lap accidents as well.

When the field rounded the final corner, the 45-year-old was on the inside, three-wide and in third. But, Gaughan had no help behind in and was swept backward. At the line, he was eighth.

“The Beard Oil Distributing Chevrolet Camaro had a heck of a run tonight,” explained Gaughan. “We saw pay dirt there at the end – third place coming out of turn four. The 19 just side drafted us and pulled us back. I didn’t have any help behind me but what a night.

“I just have to say thank you so much to the Beard family, Darren Shaw (crew chief) and Ron Lewis, my spotter, and I also want to say thank you to Richard Childress and ECR motors for all they do for us. Two top-10s this year at Daytona – what a way to go out. It was so much fun. We will see everyone in Talladega and we’ll actually be able to take the same racecar because it’s in one piece.”

The veteran NASCAR driver almost didn’t have a chance at a top-10 finish. Gaughan was busted for speeding in the second stage when he pitted with the other Chevrolet drivers. After serving a pass-through penalty, he was a lap down. Gaughan never received the free pass but stayed on track in the final stage. With just a couple hundred feet to spare, the caution waved on lap 144, putting him back on the lead lap.

The eighth-place finish is the eighth top-10 for Gaughan in the Cup Series and second in four starts this season. It is also his 155th top-10 finish across NASCAR’s three national series. This is the first time that Gaughan has earned multiple top-10s in the Cup Series since his rookie season in 2004.

Currently, the final leg in the ‘Not Gaughan Yet’ Tour is at Talladega Superspeedway on Sunday, October 4. Gaughan was only scheduled to compete in the four superspeedway Cup races this season. The inaugural Daytona International Speedway Road Course race two weeks ago was a late addition. 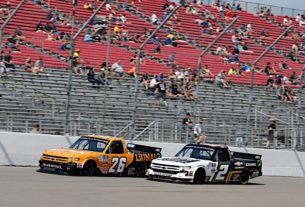 Sheldon Creed and Tyler Ankrum returning to GMS Racing in 2021 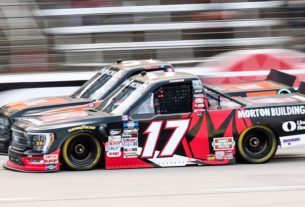 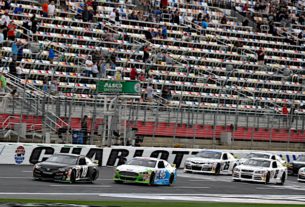