CONCORD, N.C. – A strong late-race drive by Chris Buescher made the Roush Fenway Racing driver the best of the Ford Performance contingent at the Charlotte Motor Speedway Roval.

A strategy call at the end of Stage 2 saw Buescher pit before the Stage end. The No. 17 Fastenal Ford Mustang lined up in the final Stage of the NASCAR Cup Series race just inside the top-five. The Prosper, TX native stayed inside the top-five throughout the rest of the Bank of America ROVAL 400.

Despite repeated cautions at the end of the race, Buescher held strong. He battled with William Byron and Tyler Reddick for second and third throughout the final run. A mistake by Reddick sent Byron into the wall in the infield section of the Roval. Buescher capitalized, taking third on the final lap.

“That was a fun time,” admitted Buescher. “I’m really appreciative of everybody on this Fastenal Ford Mustang group. We worked hard. We were able to stay on pace all day and had a game plan and followed through and ultimately got us into the top five. I had a top three there, but it got a little rough there at the end and I made a mistake with probably five to go. Unfortunately, we didn’t have a shot to win because of that, but we were definitely in the hunt. I enjoyed the day. I’m pretty thankful for everybody.”

While Buescher witnessed the ‘bad blood’ ahead of him between Byron and Reddick, similar situations took place further behind. Contact between Chase Elliott and Kevin Harvick ultimately results in three separate cautions. One for Elliott’s crash, one for debris from Elliott’s car, and finally one from Harvick locking up the brakes and slamming the Turn 1 wall. Buescher chalked up the bruises each car carried to the Roval’s brutal nature.

“I see bad blood on either side of us with people arguing right now,” explained Buescher. “I guess from our side of things there wasn’t a whole lot for the last couple of laps, but the Roval is always tough, it’s always brutal. Cars never come back looking as good as they started, but we hung in there and got a really solid finish out of it today. I’m just really proud of everybody.”

The third-place finish for Buescher also marked a sweep of the Charlotte races as the best Ford. 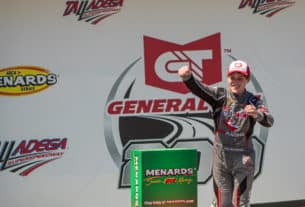 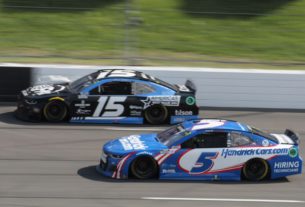 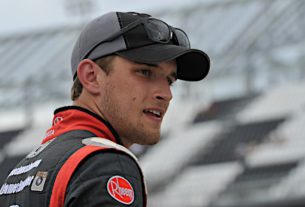