A mistake by Austin Hill with 12 laps to go in the UNOH 200 ended his bid for the 2021 NASCAR Camping World Truck Series championship.

While battling with Josh Berry just inside the top-15, Hill attempted to cutoff the Rackley W.A.R. driver. The Hattori Racing driver tried to move into the bottom lane. However, the No. 16 AISIN Toyota Tundra’s left rear clipped the right front of Berry’s No. 25 Rackley Roofing Chevrolet Silverado. The contact sent Hill sliding into the inside wall. He then ricocheted back into traffic, collecting Lawless Alan, Hailie Deegan, Derek Kraus, and Austin Wayne Self.

When the dust settled, both Deegan and Hill’s trucks sat on the apron of Bristol Motor Speedway, destroyed from the accident. While both drivers were uninjured, it effectively eliminated Hill from the Truck Series playoffs. Fellow playoff driver Chandler Smith went on to win, eliminating Todd Gilliland from the playoffs as well.

“I was just trying to get in line and my spotter told me that he was coming, and he was there,” explained Hill. “Kind of went down a little bit to see if I could spook him a little bit and maybe make him lift and I misjudged it. I came down too much. Then as soon as he got into me, it just takes all the rear stability out of it and off we went. I hate that we tore up all those other race trucks and I hope everybody ended up alright.

“It’s all on me. I let my team down. They brought me a hot rod to Bristol, a place we’re not very good at. We sped on pit road and just choked it, what else do you say. We go on to next year. Don’t know what next year looks like yet. Hopefully I’m with these guys and I can redeem myself for them and this organization because they deserve better than what they got tonight. We’ll see.”

Hill started 10th due to NASCAR’s metric qualifying format. After his Hattori Racing team opted not to pit until the end of Stage 2, he picked up 17 additional points in the stages. Despite the stage points, Hill still landed just shy of advancing to the Truck Series Round of Eight. 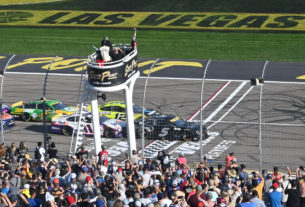 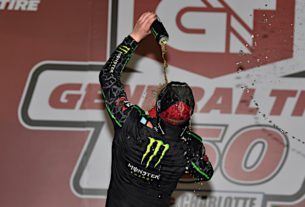 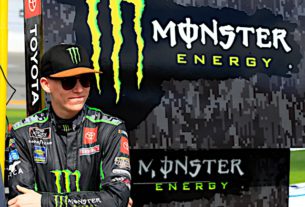