Skip to content
Home>NASCAR>OPINION: Racing in rain at Charlotte ROVAL was an entertaining challenge

CONCORD, N.C. – Some are saying the Xfinity Series race on the Charlotte Motor Speedway ROVAL with the rain drenching the track was a complete shit show – it wasn’t.

There are a lot of things that it was but the former is not the case. So, what was it? It was, most importantly, entertaining. It was also a challenge of skill, a battle of talent and an exhibition of technical knowledge and on the edge racing that we rarely see in the Xfinity Series.

How did Noah Gragson – a kid who grew up in the Nevada desert – learn to drive in the rain? His journey wasn’t easy – he went through the field several times, spun, got into a wreck, or two, and probably passed more cars than anyone else in the race. He finished second with a battered car and was challenging road course ace, A.J. Allmendinger, for the win on the final lap.

Do you know who else was challenging Allmendinger for a win? Chase Briscoe! He battled with Allmendinger lap after lap with the two exchanging the lead multiple times, each out-braking the other in different parts of the track. Briscoe got into Turn 1 too hot on the final restart at it probably cost him a shot at the win.

As for Allmendinger, he said he forced Briscoe to make a mistake – again, a strategic move that was executed perfectly even though he wasn’t out of the woods as raced to the checkered flag. Gragson was coming hard and Allmendinger was “slideways” across the start/finish line for the win.

What I took away from this race was that for the previous week, all anyone could talk about was, “how cool is it going to be racing in the rain?” Twitter and Facebook were replete with exciting comments from fans begging for some rain racing. Even the drivers were excited. But then, reality set in.

Did the track drain as well as some may have hoped? Probably not. But NASCAR paused the race and then things got back underway. There was a lot of water falling from the sky but if fans, media members, team owners or drivers are complaining about there being too many cautions they must have forgotten that the last time the Xfinity Series raced at Charlotte – May 25, 2020 – there were 11. Yes, 11 caution flags for a total of 53 laps and that was on the traditional oval. In 2019, there were 10 cautions on the Charlotte oval for 56 laps. In 2018 there were 13 cautions at the Charlotte oval, 12 at Bristol Motor Speedway, 10 cautions at Michigan International Speedway and 13 at Texas Motor Speedway. In fact, according to Racing Reference, going back to 1982 – the first year of the series – there has never been an Xfinity Series season where there wasn’t, at least, one race with 10 cautions, or more.

Last night’s race in the rain had 10 cautions for 24 laps as a comparison. Given the fact that it was raining and some of the drivers in the race had never even driven the ROVAL, that was a fair number.

Look, at the end of the night, what matters isn’t the statistics I can pull up from the history of racing. What matters is whether fans were entertained. I would argue that most were based on social media. Would I want to see cars splashing around the turns of a road course every time one pops up on the NASCAR schedule? No. But last night was entertaining.

If you didn’t like it, that’s fine. I respect that but I disagree with you. And that’s okay. People can disagree, they can take shots at one another, complain, argue or whatever but they can still be friends. I like Blue Bell’s Pralines and Cream Ice Cram but you might like Dreyer’s Rocky Road – it doesn’t mean you’re wrong, it just means you haven’t tried listeria-free Blue Bell, yet.

As I see it, with any luck, when the NASCAR Cup Series takes the track in a few hours, they will be faced with the same challenges as the Xfinity Series drivers were last night. Yes, it’s a cutoff race. Yes, there is a lot on the line. But every person in that field knows what they signed up for. If they can’t handle it then maybe we shouldn’t sell them as “the best drivers in the world.” When I left the track last night, they had just finished the IMSA race – I didn’t see any of their fans complain about that series racing in the rain or spread fear that it was “unsafe” as some bubble-wrapped “experts” pontificated about on social media. 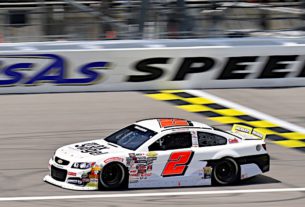 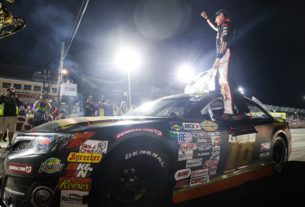 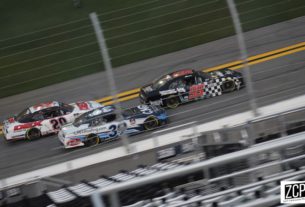 1 thought on “OPINION: Racing in rain at Charlotte ROVAL was an entertaining challenge”