NASCAR Xfinity Series Championship 4 competitor Noah Gragson saw his championship hopes fade away after late-race contact with the outside wall.

Back-to-back cautions at the end of the 200-lap race at Phoenix Raceway allowed Gragson to close in on fellow Championship 4 duo of Austin Cindric and Daniel Hemric. With 12 laps to go, the driver of the No. 9 Bass Pro Shops Chevrolet Camaro SS gained six spots. The move on the restart jumped Gragson from 12th on track to just outside the top-five. A caution for a spin by Jeb Burton forced another restart.

On thew restart with eight laps to go, it appeared that Gragson would once again gain ground on his championship rivals. However, the JR Motorsports driver slid entering Turn 1. The car kept sliding until he bounced off the outside wall. The race remained green until another accident between Jade Buford and Josh Williams occurred a lap later.

Gragson and crew chief David Elenz opted to stay on track as the race was pushed into overtime. When the Xfinity Series Championship Race went back green, the No. 9 faded back. As Hemric won the race and the championship, Gragson crossed the line in 12th, third in the championship.

“I felt like I was pushing a hundred percent,” explained Gragson. “I don’t feel like I jumped over it. It just shattered the right rear tire. I didn’t know if I had a tire down, if I hit oil, if I got into marbles on entry. Was definitely trying to push the tire to its potential. I didn’t feel like I overdrove into the corner. But (I) pounded the fence. Just kept sliding and sliding. Threw it away.

“We’re kind of disappointed just with the overall speed we had this weekend. We just got beat by those guys. They brought their A game, and we didn’t have the balance we needed to go compete. We never quit. Had an opportunity there at the end. That’s what matters most. Sure, it’s disappointing, but I don’t feel like I overdrove it.

“I got to go study and see why, if something was on the track. Nobody else spun out. I don’t know what it was, wish I knew. I wish I could say, I just (expletive) up. Don’t know what happened.”

The season finale at Phoenix marked Gragson’s last race with Elenz as a crew chief. Elenz is rumored to be moving on to an opportunity in the NASCAR Cup Series. The duo combined for five wins, 39 top-five, and 67 top-10 finishes. Elenz led the JR Motorsports No. 9 team to back-to-back championships with William Byron and Tyler Reddick in 2017 and 2018.

“We really haven’t had too many discussions,” admitted Gragson. “Just last week was really special. We felt like we could come into this race and win during this past week. I rode up to Martinsville with Dave and back down, back home with Dave afterwards. Just getting to spend that time with him was special. I’ll miss him. He’s not going to be there, but he’s not going anywhere either in my personal life.

“Just thankful to get to know him over the years. Would love to have a good crew chief step in for us. We don’t really have anyone right now.”

Gragson completes the 2021 Xfinity Series season with three victories, 13 top-five, and 20 top-10 finishes. Now he’ll set his sights on the 2022 season and continue to race for his first NASCAR championship. 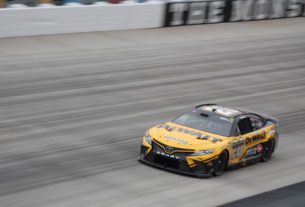 Loose Wheel to Top 5 for Christopher Bell at Dover 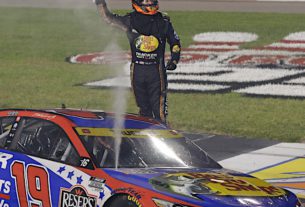