LAS VEGAS – Chaos, carnage and cautions: those were the buzzwords at Las Vegas Motor Speedway as over half the playoff drivers running for the Camping World Truck Series.

Of the eight drivers battling for the championship, only Ben Rhodes (2nd place), Matt Crafton (3rd place) and Stewart Friesen (6th place) finished all of the laps. The rest, Sheldon Creed (36th place), Chandler Smith (35th place), John Hunter Nemechek (33rd place), Zane Smith (29th place) and Carson Hocevar (22nd place) all had some type of problem or were caught up in one of the 10 caution periods.

Hocevar’s night was going fairly well until he spun trying to get on pit road and ended the night two laps down.

For Nemechek, who came into the race as the points leader, it was a particularly upsetting night as he discussed how they beat themselves following the race. His finish propelled Rhodes into the championship lead.

“It just kept shutting off, ignition problems, I don’t know, it’s part of it,” Nemechek said. “You can’t have issues like this. Coming in tonight we said we couldn’t beat ourselves and we beat ourselves. I had the fastest truck here I feel like from Stage 1 and we made adjustments and were even better but had ignition problems all night and still running fast lap times. I don’t know what to do.

“Go to Talladega and win, or I think we are in a pretty good spot for points, just got to go perform.”

After stalling on the track twice, Nemechek was pushed to the garage by a NASCAR safety truck, where the crew went to work to figure out what was wrong. He came out onto pit road with just a few laps remaining in the race but he said it was mainly to see if the problem was resolved.

Of the 10 cautions, one of them involved Creed, who was collected in a crash involving the No. 18 truck of Chandler Smith, who had rolled to the bottom of the track. As Creed dove low thinking he could avoid the carnage and plowed into the back of the Smith and his truck immediately burst into flames before coming to a stop. Creed jumped out and was taken to the infield care center where he was evaluated and released. Smith was also evaluated and released.

“I got shuffled back there and I see the No. 1 get hit and spin,” Creed said. “Honestly, I didn’t see the No. 18. I was paying attention to the No. 1 so I didn’t hit her (Hailey Deegan) and I was watching the No. 26 making sure he didn’t come down the hill and I just lost it and destroyed the No. 18 (Smith).”

Creed said his truck wasn’t “great” all night long leading up to the crash but he felt like he could have run Top 8. His finish puts him fifth in overall point heading into next week’s race at Talladega.

Smith got into the No. 26 truck of Tyler Ankrum as he spun on his own. That collected Deegan, as well, and led to the hard hit by Creed. He said after leaving the care center that he was okay and went over what happened on the track.

"Spotter told me to go low. I shoulda listened to him … I'm disappointed in myself."

Talking with Chandler Smith after he was involved in a big crash in Vegas.#NASCARonFS1 | https://t.co/TJB4JELg4h pic.twitter.com/Jhn84HY6rr

“Tyler got loose up at the top and I seen him completely sideways and some track like this, I have some experience where people are spinning up next to the wall and they come down the racetrack and take out a good portion of the field with them,” Smith said. “The spotter told me to go low, I should have listened to him. It is completely my fault, I went high, I went with my gut and bit the bullet for it. It is what it is, you know, just a heartbreaker.”

The other smith in the race, Zane Smith, brought out a caution by putting debris on the track after he cut down a tire. The rubber also destroyed the area where the battery is kept on the truck, so the team had to use various methods to resolve the problem. When they finally got a new battery in the truck, it was not fully charged and the 10-amps it was showing weren’t enough to restart the truck.

The team tried to push the truck to get it started but they were unsuccessful. At that point, the crew chief came over the radio and said, “Someone is going to have to explain to me why this battery wasn’t charged.” He took the truck behind the wall for repairs because NASCAR missed the fact that he was responsible for the caution and should have been under the Damaged Vehicle Policy.

"Someone is going to have to explain to me why this battery wasn't charge" How many volts" Be,low 10" Go get another battery" on the 21 of @zanesmith77 #NASCAR at @LVMPD 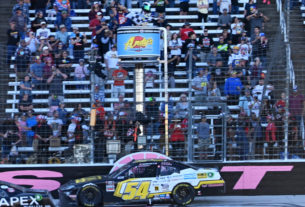 GALLERY: John Hunter Nemechek Drives Away With Victory at Texas Motor Speedway in Fort Worth 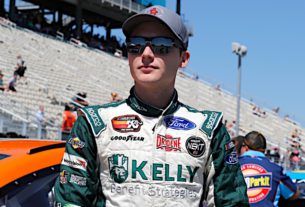 Rodgers returns to the Xfinity Series with Sam Hunt Racing 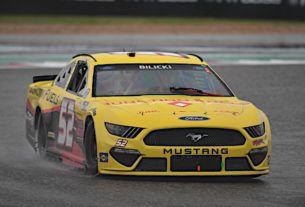 Josh Bilicki Speaks on Visibility Issues; Wishes Race Would’ve Got Back to Green