After dominating the Pro Invitational Series in 2020, Byron picked off where he left on at the virtual Bristol Dirt Track. After jumping to the lead and winning his heat, the Hendrick Motorsports driver started the 70-lap feature on the outside pole.

In a similar move that Byron made in the Pro Invitational at Richmond Raceway last year, James Davison jumped out to an early lead before the pace car had reached pit road. Byron was left battling with Chris Buescher and Ryan Preece while Davison cruised.

When the track started to transition later in the race, Buescher reeled Davison in to take the lead. After a couple of cautions, Byron finally jumped to the top spot in the virtual No. 24 Liberty University Chevrolet Camaro ZL1 1LE. While the field searched for grip, the Charlotte, N.C. native hit his marks.

Tyler Reddick appeared to be the only driver able to challenge Byron. The Richard Childress Racing driver tracked Byron down with under 30 to go. Reddick beat Byron to the line momentarily before the 23-year-old pulled back in front before a caution waved. From that point on, Byron never looked back.

On each restart, Reddick struggled to get up to speed. He fell back into the clutches of Christopher Bell and Garrett Smithley. That allowed Byron to drive away with ease, taking the checkered flag with over a second to spare on Reddick.

“It was a lot of fun,” explained Byron. “(iRacing’s) my background, everybody knows that. I really enjoy the dirt, something new for me. Really felt out of my comfort zone at the start. With some help from some guys that do dirt racing I learned it and got better. I’m excited with the different discipline, moving around, running the top around the track. Hopefully we can have a good result this weekend.”

Byron’s win netted a $5,000 donation from iRacing to the charity of his choice, Big Brothers Big Sisters of America. In high school, the third-year NASCAR Cup Series driver was a Big Brother.

“In high school I was a Big Brother, had a Little Brother then, really enjoyed it,” explained Byron. “My sister was in it then. I did it before I started traveling for races. It’s cool to give back to them, a local community that I’m happy to be a part of. We’re having a golf tournament later this year in May. I’m really looking forward to that.”

The first caution of the night took place on the eighth circuit when Alex Bowman and Corey LaJoie got together. The duo spun in front of the field on the backstretch, collecting Ross Chastain, Joey Gase, Joey Logano, and Bubba Wallace.

Caution two waved with 30 to go as contact between Bowman and Quinn Houff sent the No. 00 spinning into the path of LaJoie. The third caution waved with 14 to go after LaJoie was spun by Gase.

After initially being left off of the eNASCAR iRacing Pro Invitational Series entry list, Hill landed a ride with Team Penske. Austin Cindric was scheduled to fill-in for Brad Keselowski, who was not competing. Cindric, with Keselowski’s endorsement, gracefully stepped aside to allow the iRacing veteran to compete in the virtual No. 2 Discount Tire Ford Mustang.

The 21-car field was set via three heat races that cut the entries from 38. James Davison won Heat 1, with Byron winning the second Heat, and Ryan Preece taking the checkered flag in the final Heat race. 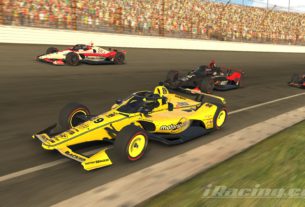 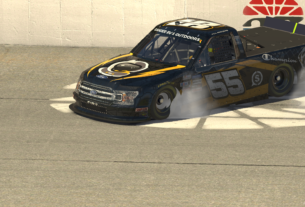 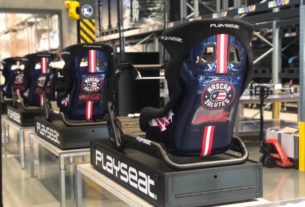