Retzlaff restarted fourth in overtime in his virtual No. 42 Legacy / Ponsse Toyota Supra. While Nickolas Shelton battled with Kaden Honeycutt, the ARCA Menards Series East driver was left to contend with 2021 eNASCAR Coca-Cola iRacing Series driver Garrett Lowe. Retzlaff tried to pass his teammate on the outside in Turns 1 and 2 but couldn’t make his car stick.

At the same time, contact between Honeycutt and Shelton killed their momentum. Diving to the inside, Retzlaff swept by all three drivers to take the lead coming to the white flag. As chaos broke out behind them, the Bobby Dale Earnhardt Legacy eSports driver just had to hold off charges from his teammates Lowe and Honeycutt. When the checkered flag waved Retzlaff was 0.346 seconds ahead of Lowe and Honeycutt.

“I don’t know, it was insane (getting through the mess on the final restart),” explained Retzlaff. “Just tried to stay on Garrett’s outside in one and two and couldn’t stay out there. I dove back to the inside hard and tried to stay down there. Hoped that I’d be able to finish P3 after running second and third basically the whole race. They ended up making contact and I saw Kaden was sideways. I took my chance, knew that was my shot to win the race.

“It was a great start. My start in all three rounds has been great. Hopefully we can just keep the moment at the next race and end up in the same spot.”

Several drivers that had been running inside the top-10 and top-15 were swept up in a final lap incident. Collin Bowden, Michael Cosey Jr, Jordy Lopez Jr, and Kyle Peddle all ended up outside the top-30 when the dust settled.

“I definitely think that real-world racing and sim racing go together,” admitted Retzlaff. “That stuff helps. It definitely makes you better on the sim. This right here proved that.”

Finishing behind the three professional drivers in the top-five were Kollin Keister and Blake Reynolds. Dylan Ault, Femi Olat, Taylor Hurst, Cody Byus, and Justin Bolton. Polesitter Shelton took the checkered flag in 12th after leading 193 of the 201 laps.

The race was ultimately slowed five times by cautions for a total of 17 laps. The first incident took place in the opening laps. Blade Whitt was spun into the outside wall on the second lap. Off the pace, he limped around until his engine expired just past the halfway mark of the race.

Jake Matheson, Blake McCandless, Malik Ray, and Donovan Strauss were also in incidents that brought out the caution flag. Of those drivers, both Matheson and Ray recovered to finish 16th and 15th respectively.

Next for the eNASCAR Road to Pro Contender iRacing Series is a trip to the virtual Homestead-Miami Speedway on Tuesday, November 9. 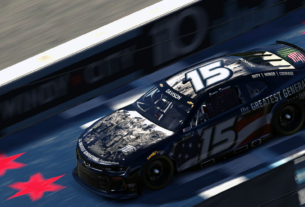 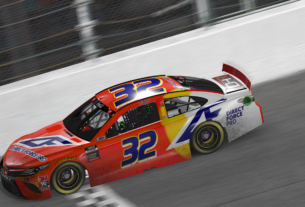 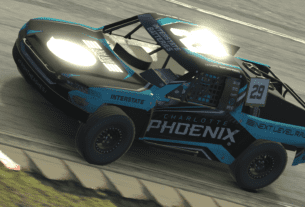