After three weeks off, the ARCA Menards Series returns to Pocono Raceway this weekend for the General Tire #AnyWhereIsPossible 200

The Series will tackle the “Tricky Triangle” for the 68th time on Friday. The defending race winner, Ty Gibbs is just one point away from taking the points lead for the first time in 2021. Corey Heim looks to continue holding onto the points lead, as he’s done since Daytona in February.

Speaking of Gibbs, the last time the Series competed, he tallied the victory at the Mid-Ohio Sports Car Course. Gibbs held off NASCAR Camping World Truck Series regular Austin Hill for the victory while Heim had a forgettable day. Heim was handed two penalties back-to-back and finished seventh.

In 67 previous ARCA races at Pocono, the previous winner’s list is filled with drivers who are now Cup regulars including Kyle Larson in 2014. Most recently though, the ARCA regulars have filled victory lane. Zane Smith, Ty Majeski, Christian Eckes, and Gibbs have tallied the last four. Since 2013, there have been 15 different winners in 15 races. Current active Cup drivers to earn victories at Pocono in ARCA includes Chase Elliott, Corey LaJoie, Larson, Cole Custer, Chase Briscoe, and Justin Haley. The future looks good for a driver if they can conquer the “Tricky Triangle”.

Heim has used a rather flawless season to keep the points lead since Daytona but Gibbs is breathing down his neck. He just has one more top-10 in his column than Gibbs which seems to be the separator of the two so far. After Mid-Ohio though, Heim and Gibbs both have had their bad race so far during the start of the season but with the stellar performances by Gibbs here as of late, Heim can’t afford another one. Heim has one career start at Pocono coming in 2019 with Chad Bryant Racing. He finished a solid fourth-place finish and will look to use that past experience to keep the points lead leaving the Pocono mountains.

Gibbs will be pulling double-duty this weekend and will use Friday’s race for some extra track time before running the Xfinity Series race on Sunday. In his debut at Pocono Raceway last year, Gibbs tallied his third career victory and first of 2020. He enters Friday’s race with four straight victories and has 13 career victories to his credit. With one more victory, Gibbs will sit alone as the 23rd most winningest driver in ARCA Menards Series history. He’ll need two more victories to catch Grant Enfinger, Benny Parsons, Bruce Gould, Jim Romine, and Bob Strait.

Thad Moffitt has been right behind Heim and Gibbs so far this season but is still chasing his first career victory. When we say he’s been right behind them, we mean it. He’s finished third twice this season with Gibbs earning the victories in both of those races. Moffitt is just 44-points behind the duo but enters a track where he’s the experienced veteran of the top-three in the standings. Moffitt has three career starts at Pocono Raceway with the best finish of 11th in 2019. Last year, Moffitt faced engine issues and was relegated to a 20th place finish.

Nick Sanchez has a lot of ground to make up but if he continues running the way he has, the battle for third will only brew more and more. He’s 72-points behind the points lead and 27-points behind third place. He finished a career-best tying third place at Toledo and has since followed that up with back-to-back fifth-place finishes but has zero starts at the Pocono Raceway. Sanchez will look to gain as much experience as possible in the practice session before Friday’s race.

Drew Dollar returns to the No. 15 this weekend and sits fifth in the ARCA points standings despite missing Toledo. Dollar had a suspension issue at Mid-Ohio which relegated him to a 12th place finish, his worst finish since Bristol last year. He’s made two Camping World Truck Series starts since racing last finishing 33rd (crash) at Texas and 24th at Nashville. Dollar finished sixth in his Pocono debut last year and will look to make some gains this weekend at a race track he’s been to before.

Kyle Sieg will race this weekend at Pocono Raceway with RSS Racing. Sieg has only missed Toledo, like Dollar, and sits sixth in points. The team was focused on just finishing the race at Mid-Ohio and still came home with a 10th place finish, their fifth top-10 finish of 2021. Sieg’s brother Ryan has raced in all five Xfinity Series races at Pocono with the best finish of 12th in the most recent. He also has four starts in the Truck Series at Pocono meaning experience should help Sieg prevail on Friday as the team looks to crack the top-five in points.

For the first time since Kansas last season, ARCA standout Chandler Smith will return to the Series this weekend. Smith got the call to Kyle Busch Motorsports for a full-time campaign and will look to use the ARCA race for extra track time. He has two career starts at Pocono Raceway with a second-place finish coming last season. The driver who was dominant in ARCA at one time will look for his first victory since Indianapolis Raceway Park last July.

Smith isn’t the only Truck Series driver looking for extra track time. GMS Racing will field the No. 21 for Jack Wood who has been rather impressive since moving to the No. 24 truck after Raphael Lessard’s departure. Wood has made five starts in ARCA this season finishing a career-high fourth at Kansas. He’s coming off of his career-best 11th place finish in the NASCAR Camping World Truck Series at Nashville and has only been improving since his debut at COTA.

Jade Buford will also look for some extra track time before the Xfinity Series race as he will make his ARCA Menards Series debut at Pocono this weekend. Buford made his ARCA East Series debut at Dover where he finished ninth. He will be running for Fast Track Racing in the No. 11 Big Machine Vodka Spiked Coolers Chevrolet,

Nick Igdalsky, grandson of Drs. Joseph “Doc” Mattioli and Rose Mattioli and Pocono Raceway CEO will make his return to the ARCA Menards Series. He will make his 33rd ARCA Menards Series start on Saturday and his ninth start at Pocono Raceway. Igdalsky finished sixth at Pocono in 2014 but hasn’t started a race at Pocono since 2015. He raced on the Daytona Road Course last season with Fast Track Racing and finished 14th. He will be running for the same team this weekend.

The General Tire #AnywhereIsPossible 200 at Pocono Raceway will be broadcasted live on FOX Sports 1 starting at 6 p.m ET and will also be broadcasted live on MRN and SiriusXM. A delayed version of the race will be available for streaming on NBC Sports Gold: TrackPass following the event. Tickets for Friday’s race at Pocono are available starting at $10 and be found by clicking here. 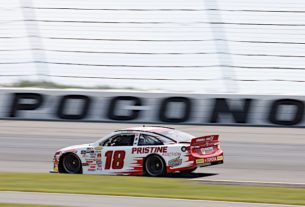 “That’s part of it, Hard racing” – Ty Gibbs on Final Restart at Pocono 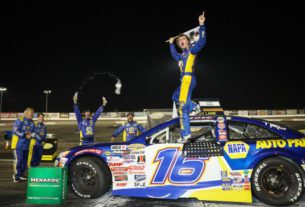 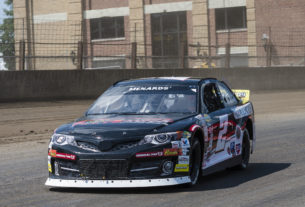