Two of those candidates took each other out of the winning picture and the third would propel with the victory. That driver would be Corey Heim, who’d take the lead on the final restart en-route to his third victory of 2021.

Gibbs would hold onto a second-place finish but the finish wouldn’t reflect on how well the No. 18 team raced.

Heim and Gibbs entered the race tied for the points lead. Notably, Heim was unhappy before the race losing a point to Gibbs by losing the General Tire Pole Award bonus point. Little did he know, that one point wouldn’t matter at the end of the 200-mile race at Pocono.

Gibbs and Smith led the field to green to kick off the action at Pocono. Gibbs had to block all the way down to the checkered box on the frontstretch as Heim attempted to get around the No. 18. The field looked like a swarm of bees on the surface of the track in multiple lanes of the wide Pocono Raceway. Heim managed to fall into second with his Venturini Motorsports teammates of Smith and Drew Dollar. Mayer fell to fifth by the fourth lap.

Gibbs had a second-and-a-half lead by lap five over Heim.

The caution came out on lap eight for Pocono CEO Nick Igdalsky, who spun. There was a six-second gap between first place Gibbs and fourth place Dollar at this point. As Gibbs kept his distance, Heim and Smith battled hard for the second position with Heim keeping the gap around three-to-four car lengths.

Gibbs restarted with the lead but as he went back up top to block the run from the No. 20 of Heim, Smith took the lead and ran with it. Gibbs was able to hold onto second while Heim was pushed back to third.

Sam Mayer made it up to fourth but began facing some issues running 10-mph slower than the leader. He got passed by Drew Dollar, Jack Wood, Nick Sanchez, and Kyle Sieg. Mayer was going to more than likely going to have to make a green flag stop but the caution would be displayed at lap 18 for Scott Melton. Melton and the No. 27 of Tim Richmond made contact. Melton would begin smoking and ARCA would throw the caution for the second time of the day.

During the caution, the issue for Mayer was that he ran over a pinion from the drive shaft of the No. 30 of Kris Wright. The pinion was lodged in the rear of the car and the team attempted to remove it from the vehicle and send Sam out to evaluate. It ultimately resulted in a catastrophic failure and the engine let go ending his day early.

How does one’s driveshaft fall out during a race? Right in the way😔#Topmostunansweredquestions

Smith rocketed out to the lead on the restart while his teammate, Heim, moved into the second position. Gibbs fell to third while Nick Sanchez and Thad Moffitt moved into the top-five for the first time of the afternoon.

The third caution of the day would come when Brian Dauzat spun out in front of Ryan Huff. He was fine until the No. 12 of Idgalsky ran into the rear of his No. 57 leaving major damage on both cars. ARCA would declare this caution as the first of two breaks during the day and Smith would bring the field down pit road.

Gibbs and the No. 18 team would throw some major adjustments as Gibbs was in dirty air for the first time of the day.

Jack Wood would take advantage of pitting twice early and take the lead after the first break of the day. He’d restart from the lead but at the exit of the corner, Smith took the lead back while Gibbs and Heim battled it out for second. The No. 25 of Smith would get out to a sizable lead with Gibbs in chase.

One of many close calls during the day featured the No. 46 of Moffitt. He was trying to get into sixth but about spun out in turn-one. He was able to save it but had to work for it. He’d fall to eighth after the incredible save.

Caution was displayed for the No. 06 of Don Thompson, who came to a stop on an access road. All of the leaders came down pit road a couple of laps early before the competition caution. ARCA decided not to declare the caution as the comp caution. Jason Kitzmiller restarted with the lead but at the exit of one, Gibbs took the lead back. Heim and Smith battled for the second position,

Even though he restarted from the lead, Kitzmiller’s day would go from bad to worse. Kitzmiller would be an innocent bystander in an accident until he wasn’t. Jade Buford went to close the door on Wood and he’d get clipped by the No. 36 of Ryan Huff. This would send the No. 21 into the wall and Kitzmiller would hit him as he was coming across. This accident only fueled the excitement that would help conclude the race.

On the final restart, Gibbs restarted with Smith behind him. Much like earlier in the race, Smith went to go around the No. 18 but the door wasn’t open and wasn’t going to be. The two made contact sending Smith sideways back into the field and somehow, he saved it. Smith’s damage would force him to pit and many thought the tire rub on the No. 18 would force them to pit also but the rub wore itself out.

Heim was the beneficiary of the incident and ultimately was in the right place at the right time. It didn’t come easy though but he had enough umph in the end and sealed his third victory of 2021 and fourth of his career. Heim leaves Pocono with a three-point lead over Gibbs.

The ARCA Menards Series takes two weeks off before returning to Elko Speedway on July 10th for the Menards 250. 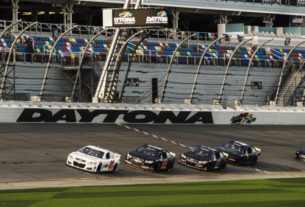 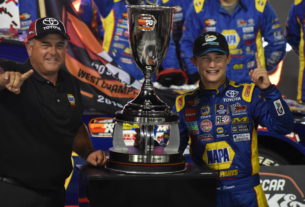 Bill McAnally – 30 Years of Dedication to the West Series 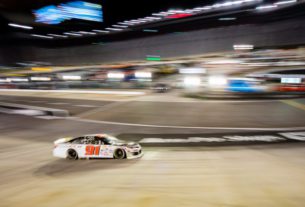 Justin Carroll to Make ARCA Return at Kansas, Attempt Truck Series Debut at Some Point in 2021