By virtue of the right strategy call, Ryan Luza earned his fourth victory at the virtual Las Vegas Motor Speedway.

Battle for the Lead

While Luza, Wilson, and the majority of the field pitted, Spacestation Racing’s Malik Ray and a handful of others gambled. Despite the tire wear, Ray’s No. 11 Ford Mustang had a sizable lead over Luza. However, Ray was told shortly after taking the lead that he would be one lap short on making it to the finish. He slowed the pace down, shutting the car off, pulling every trick in the book to try and stretch the fuel to the end.

The slowed pace allowed both Luza and Wilson to rocket back up to the front. Ray finally relinquished the lead with eight laps to go to Jake Matheson. Blade Whitt then led a lap before Luza recaptured the top spot with five to go.

When Luza and Wilson had pitted, only a car length separated the pair. By the time the XSET driver had taken the lead, he had a 1.3 second gap to the No. 17 Fastenal Ford Mustang. As the final run went caution-free, Luza cruised to his fourth victory at the virtual Las Vegas Motor Speedway, and XSET Gaming’s first victory in eNASCAR competition. It was his 16th career victory in the Coca-Cola iRacing Series.

“I was terrified of a yellow, was just sitting there praying for no caution,” explained Luza. “We were pretty confident no one could make it. I was hoping Steven would stall out once our tires evened out, and he did. That was terrible, waiting for the finish. I was waiting for the caution flag to wave on the top left of my screen. Luckily it didn’t come out.

“It’s such a huge relief to get a win and be in the playoffs now,” admitted Luza. “I’ve been stressing about if every week because we’ve been missing speed. We were pretty quick here tonight, found a little bit that we needed. It’s really big to not have so much stress on the line every single week now. We’re probably going to have 10 different winners and we’re at least locked in. Now it’s (just) about coming out and trying to win more races.”

Just three races into the season, Luza, Michael Conti, and Keegan Leahy are the only drivers locked into the eNASCAR Playoffs by virtue of wins. As long as all three drivers stay inside the top-20 in points, they will be on the 2021 eNASCAR Playoff grid.

While the second half of the 134-lap race went caution-free, the first half was marred by six cautions. Polesitter Jimmy Mullis, Daytona International Speedway race winner Conti, and four-time eNASCAR champion Ray Alfalla were among those caught up in the various incidents. By the end of the race, only three drivers on track were incident-free. Only four drivers completed the race without any car contact.

During the final 64 lap green flag run, there was one moment that almost warranted a caution. Ryan Doucette spun into the inside wall on the backstretch after contact from Whitt. However, the caution flag was held back, and racing continued unabated. Doucette was eventually black flagged for failure to meet minimum speed due to the damage.

Next up for the eNASCAR Coca-Cola iRacing Series drivers is a trip to the virtual Atlanta Motor Speedway on March 16. 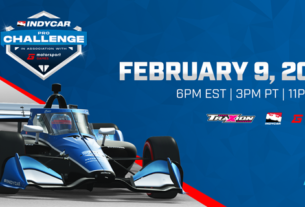 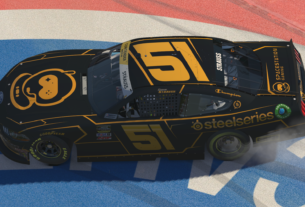 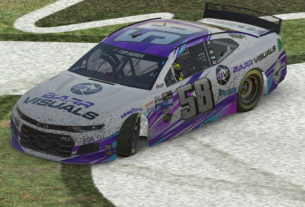