“Our United Rentals Toyota Tundra was pretty good even though it didn’t really fire off as well as we hoped it might,” stated Hill. Every time I got out there, it seemed like I would run down some of the slower trucks a little quicker than I thought I would. It was hard to get clean laps in. We’ve been struggling a little bit with front turn on entry [to the corners], the bumps in [turn] three has been a really big issue.”

The practice session marked the first time that Hill was working with spotter Trey Poole. He previously worked with Eddie D’Hondt, who was suspended by NASCAR earlier this week.

“I’ve known Trey since our Legends Cars days, we used to race against each other,” explained Hill. “This is actually the first time that we’ve ever worked together spotting-wise. It feels good to get out there and have some practice.

“He says some things differently, so during that practice he was up on top, and we worked through some things. We can go back and talk about how that practice went, what I liked and didn’t like. It will be real beneficial going into the race tonight.”

Nemechek was 0.017 seconds behind despite tagging the outside wall. His Kyle Busch Motorsports (KBM) team made quick repairs to get his Tundra back on track.

Timothy Peters was the first to hit the wall in practice. His No. 25 Rackley W.A.R. Chevrolet Silverado pancaked the outside wall just minutes into the only practice session for the North Carolina Education Lottery 200. Peters will be in a back-up truck for the 200-mile race.

Danny Bohn, Drew Dollar, Keith McGee, C.J. McLaughlin, and Akinori Ogata also crashed in the only practice session of the day. Dollar’s No. 51 Sunbelt Rentals Toyota Tundra team was forced to pull a back-up truck out of the hauler for the KBM driver.

One major commonality amongst each driver that crashed was the traction compound. Several trucks broke loose upon hitting the PJ1. Hill even described his truck as being in a ‘four-wheeled slide’ when he drove in the compound.

“I was planning on staying out of the PJ1, caught one of the slower trucks, went to their outside and for a four-wheeled slide and thought I was going to get in the wall,” admitted Hill. “I was able to get out of it thankfully and gather myself up before I got too far off the racetrack. It’s sketchy up there right now. I actually thought there would be a little more grip in the PJ1, so I really wasn’t expecting that to happen when I drove up into it.”

With 38 entries for the NASCAR Camping World Truck Series, and 36 spots on the grid, two trucks will go home following qualifying. Qualifying for the North Carolina Education Lottery 200 is scheduled for 5:30 p.m. ET on FS1. 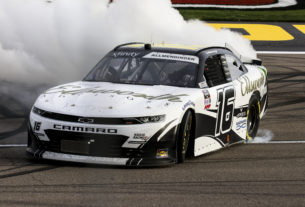 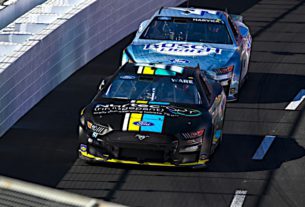 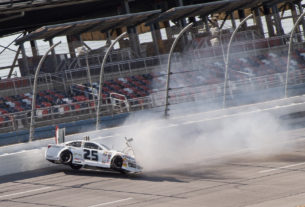